Rooftop gardens and greenery can help ease some of the severe heat in cities, according to research from climate scientists at NASA’s Goddard Institute for Space Studies (GISS) in New York. For several decades, researchers have promoted replacing black tar and other dark-colored roofing materials with bright, Sun-reflecting surfaces or "green roofs" full of plant cover. Now they have used freely available satellite data to measure how effective these changes are.

Heat is often intensified or amplified in cities, a phenomenon known as the urban heat island effect. Asphalt, concrete, and similar materials absorb and retain significantly more heat than vegetation, so temperatures in urban areas are often 10 degrees Fahrenheit hotter than surrounding suburbs or rural regions. In neighborhoods with fewer trees and green spaces, this heat often disproportionately affects older adults, low-income communities and some communities of color.

Green roofs are designed to harness the cooling power of plants to lower the temperature in city spaces. The greenery may be extensive (shallow soil, low-maintenance plants) or intensive (deeper soil, more diverse plants and trees).

The GISS team studied three sites in Chicago to see how green roofs affected surface temperatures around those buildings, and whether there was a difference between those sites and others nearby without green roofs. Two of three green roofs in the study reduced temperatures, but results indicated that effectiveness may depend on location and plant diversity, among other factors. The results were recently published in the journal Sustainable Cities and Society.

“As cities grow and develop, they need to make good decisions about their infrastructure, because these decisions often last for 30 or 50 years or longer,” said Christian Braneon, a climate scientist and civil engineer at Columbia University and GISS. “In the context of more frequent heat waves and more extreme heat, it’s important to understand how these urban design interventions can be effective.”

Braneon and the GISS team partnered with Chicago’s Public Health and Planning and Development departments to study three sites that had installed green roofs in the early 2000s: Millennium Park, City Hall, and a Walmart shopping center. Using imagery captured by the Landsat 5 satellite between 1990 and 2011, the researchers compared changes in land surface temperatures and vegetation abundance at the study sites as well as nearby control sites without green roofs.

Results from the three sites were mixed. Millennium Park, which has an intensive mix of plants and is located near Lake Michigan, showed significantly lower average temperatures after its green roof was installed in 2004. It was the only site where the roof fully mitigated climate warming over the study period.

City Hall, also an intensive site, had a green roof installed in 2002. Its temperatures after green roof installation were lower than those at the control site, but they were rising toward the end of the study period.

The Walmart site told a different story. While the green roofs at Millennium Park and City Hall were added onto existing buildings, the supermarket was newly built during the study period. Even though the Walmart installed an extensive green roof, the conversion of the land from a vacant, grassy lot to a store meant the vegetation index for the landscape decreased.

“In a lot of places, you might be developing an area that didn’t have something there before; it just had overgrown vegetation,” said Braneon, who co-leads urban research for the Climate Impacts Group at GISS. “You might think that putting a green roof on your new building would make a significant impact. But what we see is that a lot of impervious material may also be added there – such as a parking lot around the building. As a result, you might reduce the impact of the parking lot, but you certainly haven’t created the cooling effect that the overgrown vegetation had.”

The benefits of green roofs depend on a variety of factors — from geographic region and plant diversity to rooftop structure and the cooling efficiency of the building itself, the scientists said.

Studies with larger sample sizes are needed to tease apart these details, but this study represents a promising start. With urban heat island effects expected to intensify as Earth’s climate warms, it will become more important to understand these variables.

The study method is designed to be used by other cities for further research, said lead author Kathryn McConnell, a doctoral candidate at Yale University’s School of the Environment. The simple analysis, publicly available data, and model for working directly with cities could help urban planners assess the viability of green roofs in their own areas.

“My hope would be that the methods we proposed show a low-cost way for folks working in less-resourced cities – who maybe don’t have access to a university or government researcher – to study their own communities,” McConnell said.

“Traditionally, civil engineers and urban planners assumed a stationary climate,” Braneon added. “The whole practice is built on the premise that we can look at the past to assess risk in the future. Everything is being flipped on its head due to climate change, so I’m hoping to do more work that changes how civil engineers and urban planners practice.”

A quasi-experimental approach for evaluating the heat mitigation effects of green roofs in Chicago, Illinois

In the coming decades, millions of urban residents will be exposed to increasingly deadly heat extremes. As an adaptive response to rising temperatures, many cities have begun to install vegetated ”green” roofs, which now vary widely in structure and size, and have generally been shown to have cooling capacity. Yet, little research has been done to differentiate which types of green roofs are most effective at reducing urban heat. We present a method to evaluate the cooling effects associated with green infrastructure that draws on publicly available satellite imagery and open-source software for analysis. Based on a quasi-experimental research design that integrates social and physical science approaches, this technique is able to identify the cooling effects of green infrastructure against background warming trends associated with urbanization and climate change. We demonstrate this method at three green roof sites across the City of Chicago, finding that the study sites with larger, intensive green roofs accompanied by diverse plant species have greater cooling benefits than the extensive, monoculture green roof. Our low-cost method can aid policymakers and planners in empirically evaluating the cooling

NASA researcher finding ways to turn down the heat in cities 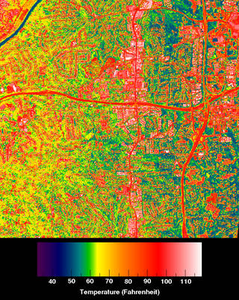 Urban heat is a growing issue