A novel screening platform has flagged more than 95 percent of stage 1 cancers, according to a pilot study published in Nature Communications Medicine. If validated by future studies, the approach offers a new way to detect the third-leading cause of U.S. cancer deaths in 2020.

The study of 139 stage 1 and 2 cancer patients and 184 controls is the first clinical test of a platform technology called high-conductance di-electrophoresis, developed at Moores Cancer Center at UC San Diego Health 12 years ago. It detects extracellular vesicles (EVs), which contain tumor proteins that are released into circulation by cancer cells as part of a poorly understood intercellular communication network. Artificial intelligence-enabled protein marker analysis is then used to predict the likelihood of malignancy.

In addition to detecting 95.5 percent of stage 1 pancreatic cancers, the approach flagged 74.4 percent of stage 1 ovarian cancer and 73.1 percent of pathologic stage 1A lethally aggressive serous ovarian adenocarcinomas — all with more than 99 percent specificity — illustrating the potential value of this technology for early cancer detection.

Liquid biopsy tests produce promising results for cancer therapy monitoring and disease relapse, Lippman said, “but they can cause real harm to otherwise healthy people when used for early-disease screening due to unacceptably high false-positive rates that lead to diagnostic tests that are not only expensive, but often dangerous.”

Early cancer detection research has yielded tremendous health benefits, Lippman said, resulting in screening methods that detect cancers of the cervix, breast, colon and rectum when they are highly curable. Currently, however, only 5 percent of pancreatic cancers are diagnosed in stage 1 and only 10 percent in time for effective surgery. In 2020, 46,774 Americans died of pancreatic cancer, according to the Centers for Disease Control and Prevention.

“Pancreatic cancer has the lowest five-year relative survival rate of all major cancer killers and is the only one for which both the incidence and death rates are increasing,” said Andrew Lowy, MD, clinical director for Cancer Surgery at UC San Diego Health Moores Cancer Center, and chief of Division of Surgical Oncology at UC San Diego School of Medicine. “Pancreatic cancer is notoriously difficult to detect early, at a stage when surgical resection, the only curative therapy, is possible. At this stage, patients typically have few if any symptoms.”

If study results are validated, Lippman said, “we can greatly reduce the mortality from this disease which will soon become the second-leading cause of cancer mortality in the U.S.” 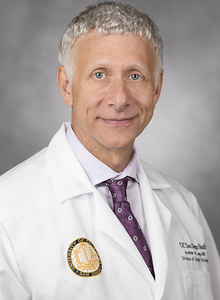