Philadelphia (April 5, 2022) – In a new study, many athletes reported symptoms that are often used to diagnose concussions even though they did not suffer a head injury. The findings suggest that some symptoms, such as fatigue and neck pain, could be attributed to intense exercise rather than a brain injury.

The research raises new questions about the Sport Concussion Assessment Tool (SCAT), a questionnaire that is widely used along with other methods to diagnose concussions sustained during sports games.

“Our findings highlight the importance of considering the effects of exercise and fatigue in assessing concussion in athletes on the field,” said the study’s first author, Stephanie Iring, a doctoral candidate in the laboratory of Jorge Serrador, PhD, at Rutgers University in Newark, New Jersey, and Western Sydney University in Australia. “While players with a head impact may report more symptoms generally, we have to be cautious in using all symptoms [on the assessment] since some are common after intense exercise even when there was no head impact.”

Iring will present the research at the American Physiological Society annual meeting during the Experimental Biology (EB) 2022 meeting, held in Philadelphia April 2–5.

A concussion is a type of traumatic brain injury usually caused by a blow to the head. Although concussions are not typically life-threatening, their effects can be serious and long-lasting. About 3.8 million sports-related concussions are reported each year in the U.S.

SCAT is a tool designed for use by medical professionals to determine whether a player has suffered a concussion. The assessment includes questions about “red flag” symptoms such as neck pain, headache, muscle weakness and vision problems in addition to tests used to assess memory loss and other symptoms.

In most previous studies of the tool, researchers have compared symptoms in athletes who experienced a blow to the head with people who have been at rest. For the new study, researchers compared SCAT scores in rugby players who had sustained a blow to the head with teammates who had just played an intense rugby match but did not have a head impact. In total, they assessed 209 players, 80 of whom had experienced a head impact and 129 who had not. For the study, the researchers used the SCAT3 version of the SCAT assessment.

Some symptoms, including headache and “not feeling right,” were more closely associated with having a head injury, suggesting these symptoms might be a stronger indicator of concussion in players that have just finished an intense game, according to researchers. In addition to headache, other symptom categories that were more common in those with a head injury included cognitive-sensory effects, emotional-affective symptoms and hypersensitivity. The researchers suggested that further studies are needed to examine how these components can be used along with current physiological measures to better assess a concussion in athletes.

Iring will present this research from 10:15 a.m.–12:15 p.m., Tuesday, April 5, in Exhibit/Poster Hall A-B, Pennsylvania Convention Center (Poster Board Number E355) (abstract). Contact the media team for more information or to obtain a free press pass to attend the meeting.

Physiology is a broad area of scientific inquiry that focuses on how molecules, cells, tissues and organs function in health and disease. The American Physiological Society connects a global, multidisciplinary community of more than 10,000 biomedical scientists and educators as part of its mission to advance scientific discovery, understand life and improve health. The Society drives collaboration and spotlights scientific discoveries through its 16 scholarly journals and programming that support researchers and educators in their work. http://www.physiology.org

Diagnosing sports-related concussions may be harder than previously thought 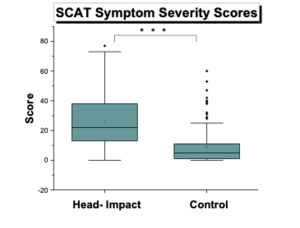