Lions typically aren’t keen on making new friends. The giant cats guard their territory fiercely and can mortally wound a foe with a single swipe. While aggression is an advantage for apex predators in the wild, it poses real challenges for lions on reserves or in captivity, a number that is growing due to habitat loss. Researchers working on a wildlife reserve in Dinokeng, South Africa found that an intranasal application of the “love hormone” oxytocin could make lion meet-cutes less life-threatening. Their work appears March 30 in the journal iScience.

In the summers of 2018 and 2019, a team led by animal biologist Craig Packer and neuroscientist Sarah Heilbronner from the University of Minnesota spent their days using hunks of raw meat to lure lions up to a fence so they could spray oxytocin up their noses with a tool that looks like an antique perfume bottle.

“By spraying the oxytocin directly up the nose, we know it can travel up the trigeminal nerve and the olfactory nerve straight up into the brain.” says first author Jessica Burkhart. “Otherwise the blood-brain barrier could filter it out.”

After these treatments, Burkhart and her colleagues observed that the 23 lions who were given oxytocin were more tolerant of other lions in their space and displayed less vigilance towards intruders. “You can see their features soften immediately, they go from wrinkled and aggressive to this totally calm demeanor,” says Burkhart. “They totally chill out. It’s amazing.”

Researchers measure social tolerance by seeing how close a lion who has possession of a desired object, in this case a toy, will let others approach it. “After the lions were treated with oxytocin, and we gave them their favorite pumpkin toy to play with, we saw the average distance between them drop from about 7 meters with no treatment to about 3.5 meters after oxytocin was administered.”

In a scenario where food was present, however, the big cats did not show an increased tolerance to each other, even after the hormone was given. Importantly for future introductions, the hormone-treated lions significantly decreased their vigilance toward potential intruders, never roaring in response to recorded roars of unfamiliar lions, whereas untreated lions always roared in response.

This kind of treatment may become particularly helpful as cities in Africa sprawl and encroach upon lions’ territory. In order to keep them safe and away from humans, many have been transported to private fenced reserves, which often results in lions from different prides being mixed in with one another. “Currently we’re working on introductions of animals who have been rescued from circuses or overseas or war zones that now live in sanctuaries,” says Burkhart. “The hope is that this will translate to animals being relocated in the wild, helping them to become more inclined to their new social environment so they're more curious and less fearful, leading to more successful bonding.”

This work was supported by the Evelyn Goyak Trust and the Rancho La Puerta Foundation.

Oxytocin treatment can take lions from ferocious to friendly 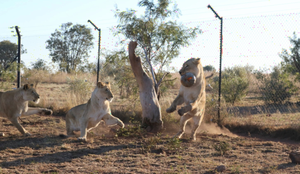