Philadelphia (April 5, 2022) – Can’t resist your pup’s adoring expression when he begs for a treat? A new study reveals key anatomical features that could explain what makes dogs’ faces so appealing. The findings also suggest that humans contributed to dogs’ ability to form facial expressions through thousands of years of selective breeding.

“Dogs are unique from other mammals in their reciprocated bond with humans which can be demonstrated though mutual gaze, something we do not observe between humans and other domesticated mammals such as horses or cats,” said said Anne Burrows, PhD, professor in the department of physical therapy at Rangos School of Health Sciences at Duquesne University in Pittsburgh, the study’s senior author. “Our preliminary findings provide a deeper understanding of the role facial expressions play in dog-human interactions and communication.”

Burrows will present the research at the American Association for Anatomy annual meeting during the Experimental Biology (EB) 2022 meeting, held in Philadelphia April 2–5. The research team also included Madisen Omstead, laboratory manager for the Rangos School of Health Sciences department of physical therapy.

Dogs and wolves are closely related. Though the exact timing is unclear, scientists estimate that the two species diverged genetically some 33,000 years ago as humans began selectively breeding wolves, the first species ever to be domesticated.

The new study focuses on the anatomy of tiny muscles used to form facial expressions, called mimetic muscles. In humans, these muscles are dominated by “fast-twitch” myosin fibers that contract quickly but also fatigue quickly, which explains why we can form facial expressions rapidly but not hold them for long. Muscle cells with more “slow-twitch” fibers are more efficient for long, controlled movements and don’t tire as quickly.

For the study, researchers compared the myosin fibers in facial muscle samples from wolves and domesticated dogs. The results revealed that, like humans, both dogs and wolves have facial muscles that are dominated by fast-twitch fibers, but wolves have a  higher percentage of slow-twitch fibers relative to dogs.

“These differences suggest that having faster muscle fibers contributes to a dog’s ability to communicate effectively with people,” said Burrows. “Throughout the domestication process, humans may have bred dogs selectively based on facial expressions that were similar to their own, and over time dog muscles could have evolved to become ‘faster,’ further benefiting communication between dogs and humans.”

In previous research, the team discovered that dogs have an additional mimetic muscle that is absent in wolves and contributes to the “puppy-dog eye” expression. The scientists note that further research is needed to confirm their new findings with antibody stains suitable for differentiating additional myosin fiber types, which could shed new light on the anatomical differences between dogs and wolves.

Burrows will present this research from 1:45–2:00 p.m. Tuesday, April 5, in Room 105 AB, Pennsylvania Convention Center (abstract). Contact the media team for more information or to obtain a free press pass to attend the meeting.

About the American Association for Anatomy (AAA)

Study reveals the science behind those irresistible puppy-dog eyes

Faces of wolf, dog and human 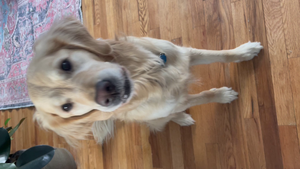