Can the neutrino eyes of humanity, observatories such as the IceCube in Antarctica, really see neutrinos coming from deep space? The answer is beginning to come from experiments at the Large Hadron Collider (LHC) where, amongst others, the internal structure of protons is being studied. According to the latest model by physicists from the IFJ PAS, this structure seems to be richer in charm particles to a degree that makes it difficult for terrestrial neutrino observers to interpret what they see.

Contrary to popular notions, the proton may consist of not three, but even five quarks. An additional pair is then formed by a quark and antiquark created in the interactions of gluons inside the proton. It has long been supposed that these 'extra' pairs can sometimes even be made of such massive quarks and antiquarks as charm. It now turns out that taking into account the intrinsic charm of protons allows us to more accurately describe the course of phenomena recently recorded in one of the low-energy experiments at the LHCb detector at the LHC. The relevant theoretical model is presented by physicists from the Institute of Nuclear Physics of the Polish Academy of Sciences (IFJ PAN) in Cracow in Physical Review D.

School textbooks paint a picture of the proton as a particle being a simple conglomeration of three quarks: two up quarks and one down quark, glued together by strong interactions carried by gluons. In physics, such a simplified model has not had a long career. Already at the end of the 1980s, it turned out that in order to explain the observed phenomena one has to take into account light quarks coming from the meson cloud in the nucleon (these are so-called higher Flock states). Surprisingly, the effect is not at all marginal and may represent even a 30% correction with respect to the simple three-quark model. Unfortunately, so far it has not been possible to determine how large a similar contribution from charm quarks is.

“Our earlier models of charm formation have repeatedly shown agreement with experiments. At high energies of proton collisions, when two opposing beams of protons underwent mutual interactions at the LHC, we were able to describe quite well the production of pairs involving charm quarks and antiquarks. The thing is, however, that although they were formed during proton collisions, they did not come from the interior of protons. They were created as a result of the fusion of gluons that had been emitted by protons a bit earlier,” says Prof. Antoni Szczurek (IFJ PAN).

Hope for progress in tracing the charm inside the protons themselves was brought by recent measurements performed in the LHCb detector with a single proton beam aimed at a stationary helium or argon gas target.

“When collisions occur at the highest energies at the LHC, a large proportion of particles that are products of proton collisions move in the 'forward' direction, along the proton beams. As a result, they end up in an area where, for technical reasons, there are no detectors. However, the collisions of protons with helium nuclei, which we have just analysed, took place at energies up to several tens of times lower than the maximum energies reached by the LHC. The products of collisions bounced around at greater angles, more sideways, and as a result were registered in detectors and we could look at them,” explains Dr. Rafał Maciuła (IFJ PAN).

To describe the data from the experiment at the LHCb detector, the Cracow-based physicists used a model extended by the possibility of a charm quark or antiquark breaking out from inside the proton. Calculating the probability of such a process from first principles was not possible. The researchers therefore decided to check at what probability values the agreement between the model predictions and the recorded data would be the highest. The result obtained suggested that the contribution of charm pairs inside the proton is no greater than about 1%.

After breaking out of the proton's interior, the charm quark-antiquark pair quickly changes into short-lived D0 mesons and antimesons, which in turn produce more particles, including neutrinos. This fact inspired physicists from the IFJ PAN to confront the new model with data recorded by the IceCube neutrino observatory in Antarctica.

Nowadays, thanks to the techniques used, the IceCube scientists are sure that if they register a neutrino with a huge energy (of the order of hundreds of teraelectronvolts), it means that the particle came from deep space. It is further assumed that neutrinos with slightly lower, but still rare high energies, are also cosmogenic in nature. However, if a charm quark-antiquark pair can be knocked out of the proton interior, decaying in a cascade containing high-energy neutrinos, this interpretation can be challenged. Indeed, neutrinos in a certain energy range, currently being recorded, may originate not from space, but precisely from cascades initiated by collisions between particles of primary cosmic radiation and atmospheric gas nuclei. An article exploring this possi­bility has gone to press in the European Physical Journal C.

“In analysing the IceCube observatory data, we adopted the following tactic. Let’s assume that virtually all currently recorded neutrinos in the energy range we are studying originate from the atmosphere. What would the contribution of charm quark-antiquark pairs inside the proton have to be in order for us to get agreement with the measurements to date using our model? Imagine that we obtained a value of the order of one percent, virtually identical to the value from the model describing proton-helium collisions in the LHCb detector!” says Dr Maciuła.

The convergence of estimates for both the cases discussed above requires great caution in deter­mining the sources of neutrinos recorded by modern observatories. However, the Cracow researchers stress that their results impose only an upper limit on the contribution of charm quarks and antiquarks to the structure of the proton. If it turns out to be smaller, at least some of the currently detected high-energy neutrinos will retain their cosmic nature. However, if the upper limit is the correct estimate, our interpretation of their sources of origin will have to change significantly, and IceCube will turn out to be not only an astronomical observatory, but also... atmospheric.

The Henryk Niewodniczański Institute of Nuclear Physics (IFJ PAN) is currently one of the largest research institutes of the Polish Academy of Sciences. A wide range of research carried out at IFJ PAN covers basic and applied studies, from particle physics and astrophysics, through hadron physics, high-, medium-, and low-energy nuclear physics, condensed matter physics (including materials engineering), to various applications of nuclear physics in interdisciplinary research, covering medical physics, dosimetry, radiation and environmental biology, environmental protection, and other related disciplines. The average yearly publication output of IFJ PAN includes over 600 scientific papers in high-impact international journals. Each year the Institute hosts about 20 international and national scientific conferences. One of the most important facilities of the Institute is the Cyclotron Centre Bronowice (CCB), which is an infrastructure unique in Central Europe, serving as a clinical and research centre in the field of medical and nuclear physics. In addition, IFJ PAN runs four accredited research and measurement laboratories. IFJ PAN is a member of the Marian Smoluchowski Kraków Research Consortium: "Matter-Energy-Future", which in the years 2012-2017 enjoyed the status of the Leading National Research Centre (KNOW) in physics. In 2017, the European Commission granted the Institute the HR Excellence in Research award. The Institute holds A+ Category (the highest scientific category in Poland) in the field of sciences and engineering.

Charm quarks and antiquarks in protons of atomic nuclei of the Earth's atmospheric gases may produce some of neutrinos recorded by modern neutrino detectors. (Sources: IceCube/NSF)

Neutrinos detected by modern detectors may come from space or from the interaction of cosmic rays with gases of the Earth's atmosphere. (Sources: IFJ PAN) 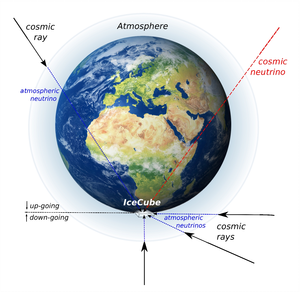