DURHAM, N.C. -- Mechanical engineers at Duke University are using two electronic “voices” singing a harmonic duet to control suspended particles and cells in new and valuable ways. Their prototype device can form and rotate a single-layer crystal from a group of particles, create arbitrary shapes with a given number of particles, and move pairs of biological cells together and apart again hundreds of times.

These abilities could serve a wide variety of fields, such as materials science, soft condensed-matter physics, biophysics, life science and medicine.

For example, the researchers have shown that the device can selectively pair two individual cells and measure their adhesion forces -- a feat that doctors could use to determine treatment for individual cancer patients. Because of the dexterity and gentleness of the acoustic device, the researchers have named it the HANDS platform. (Harmonic Acoustics for Non-contact, Dynamic, Selective particle manipulation.)

The results appear online on March 24 in the journal Nature Materials.

“The separation of paired particles or cells has been a major target in the field of acoustic manipulation for many years,” said Tony Jun Huang, the William Bevan Distinguished Professor of Mechanical Engineering and Materials Science at Duke. “Our HANDS platform is the first method of separating paired objects, which provides a way into cell-cell interaction studies that are needed extensively in biophysics studies and drug discovery.”

Acoustic tweezers are a rapidly developing field that uses various physical phenomena of sound waves to gently manipulate particles or cells suspended in liquids without touching them. Some examples pinch particles between two sound waves and adjust the waves’ phase or origination point to move them. Others create patterns by combining two static standing sound waves together to separate particles into different formations, such as a grid.

Now, researchers have added a new layer of complexity to these devices by introducing piezoelectric melodies and harmonies into the setup. Where previous devices create static standing waves, the HANDS platform prototype uses a function generator to create complex standing waves that change rapidly. One could think of it as, rather than the machines singing a single note, they’re now hitting the rapid highs and lows of a complicated opera with two singers.

The new device works by placing sound-creating transducers on each side of a small square chamber filled with liquid. These four transducers work in step with those directly across from them, forming two pairs. One creates patterns in the chamber horizontally and the other vertically. The interaction of these two complex, quickly changing sound wave patterns creates dynamic abilities never before demonstrated within the field.

“I simulated how these waves might combine to manipulate the particles in the chamber and then ran experiments to see actual results,” said Shujie Yang, a postdoctoral associate in the Huang laboratory. “It took a long time and many trials, but finally the simulations became good enough to start matching the results. And once the simulations were accurate, I could begin predicting new abilities.”

In the paper, Yang demonstrates several novel abilities of the harmonic duet acoustic tweezers. In one experiment, he shows that the HANDS platform can flatten and pattern a 3D cluster of 24 particles into a crystalline structure. It can spin these flat formations like a plate on a fingertip.

Moving to individual particle manipulation, the paper demonstrates particles coaxed into three different formations bearing a striking resemblance to the letters O, D and K. The device then pairs together dozens of single particles like teenagers at a school dance and shows that it can pull each pair apart and put them back together again more than a thousand times.

In the final demonstration, Yang shows that the device can select a single pair of cells out of a lineup, push them together and pull them back apart. He then uses this ability to measure the adhesion forces at work between two cells touching one another.

According to the researchers, this is the most exciting ability of the HANDS platform, as it could allow detailed tests for personalized medicine.

“I am thrilled about the capabilities of this platform, which is as gentle as a mother’s hands,” said Luke Lee, professor of medicine at Harvard Medical School, who is a co-leader of the research. “Gentle and sensitive mother’s hands allow us to establish the foundation of quantitative cell biology and translational precision medicine.”

“For example, we can systematically study T-cell interactions with cancer cells in a high-throughput manner and obtain precision cell-cell interaction forces,” Lee said. “This could help doctors find the most effective and specific cell therapy for patients as personalized precision medicine.” 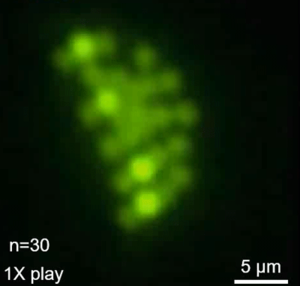