Species that rely on darkness to forage and feed are losing the gift of camouflage thanks to advances in the lighting used to illuminate the world’s cities and coastlines, a study has shown.

The worldwide proliferation of energy efficient broad spectrum lighting has the potential to disrupt an array of visually guided ecological processes.

New research has demonstrated that these new lighting technologies can significantly improve a predator’s ability to discriminate prey species against a natural background.

The magnitude of this effect varies depending on an organism’s colour, meaning certain colour variations may be at greater risk.

The study, published in the Journal of Applied Ecology, was conducted by researchers at the University of Plymouth and Plymouth Marine Laboratory (PML).

It is one of the first to examine the potential for artificial light at night (ALAN) to affect the camouflage mechanisms of coastal species.

Oak McMahon, who led the research while studying for an MSc in Applied Marine Science and is now a PhD candidate at the University of Plymouth, said: “This study clearly indicates that new lighting technologies will increase the conspicuousness of prey species by reducing the efficacy of their camouflage. Our findings revealed that species of Littorinid snails found commonly on our coastlines will remain camouflaged when illuminated by older style lighting. However, when illuminated by modern broad spectrum lighting, they are clearly visible to predators and at far greater long-term risk as a result.”

Funded by the Natural Environment Research Council, this is the latest research by the University and PML to highlight the growing levels of ALAN and its impacts on coastal environments.

For this study, scientists used a well-established model to determine the conspicuousness of three distinct colour morphs of Littorinid snail found commonly along the world’s coastlines.

Under LPS lighting, all snails were effectively camouflaged. However, when illuminated by LEDs, MH, the sun or the moon, yellow snails were significantly more visible compared to brown and olive ones in the majority of cases.

Dr Thomas Davies, Lecturer in Marine Conservation at the University of Plymouth and the study’s senior author, said: “As technologies develop, there has been a shift from narrow spectrum to lighting that enables us to live and travel in a safe, secure manner. However, estimates suggest that a quarter of the planet between the Arctic Circle and Antarctica is now being affected by night-time light pollution. Some predictions say that LED bulbs will account for 85% of the global street lighting market in around five years, and our study highlights that such advances will have repercussions for humans and animals alike now and in the future.”

Dr Tim Smyth, PML Head of Science for Marine Biogeochemistry and Observations and co-author on the research, added: “The ability to light our environment around the clock has transformed the urban landscapes over the past century and has ushered in what some call the Urbanocene. The shift from the orange glow over cities, typical of my youth in the 1970s and 80s, has now shifted much more towards energy efficient wide spectrum LEDs which even enables us humans to correctly perceive colour. This work shows that this advancement has additional ramifications for the natural world, which is having to adapt at an increasing rate to the artificial changes we are making to the environment. We need to learn to adapt our technologies to avoid the worst consequences of their adoption.”

With estimates indicating that 23% of the world’s surface, between the planet’s polar regions, are affected by ALAN – and a rate of increase of 2.2% between 2012 and 2016 – the need to address the situation is pressing to say the least.

In the study, the researchers highlight a variety of mitigation methods available to planners and environmental managers when considering its ecological impacts.

These include reducing the amount of light used, shielding lights to reduce their effects on the surrounding environment, employing part-night lighting during times of peak demand, and manipulating the spectra of lighting to minimise ecological impacts.

The researchers highlight that while it may seem intuitive to suggest using narrow spectrum lighting to avoid these impacts, the effects of ALAN extend beyond those seen on camouflage and that all parts of the visual spectrum will likely have some ecological impact.

Losing the cover of darkness 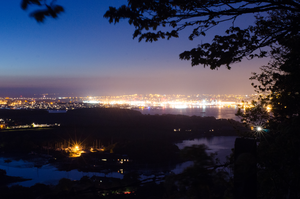 Street lighting creates an artificial glow in the night sky