Cannibalism is common throughout the animal kingdom. It can be strange to think about real life “battle-royales” playing out in nature such that many individuals enter and only a few emerge victorious, but in the tropics we observe exactly that.According to researchers at the University of Jyväskylä, Finland, in addition to size difference, relatedness affects whether or not a poison frog tadpole is more likely to be eaten.

Fathers of the dyeing poison frog, Dendrobates tinctorius, will transport their tadpoles to small pools of water where they are confined until metamorphosis. Tadpoles of this species are aggressive cannibals and resources in these small pools of water are limited. Thus, there is a fierce competition between individuals for resources to survive until metamorphosis. Although these nurseries become the arena for a battle-royale between tadpoles, there are instances where more than one individual survives to become a frog, indicating that sometimes cannibals let each other live. This led a research team based at the University of Jyväskylä to wonder: what exactly shapes aggressive decisions between individuals who have the ability to cannibalize each other?

Researchers suspected that aggression could be mediated by relatedness, size differences, or perhaps a combination between these two forces. Biologically, there is precedence for siblings to be more tolerant of each other. This would mean that firstly, tadpoles have some mechanism of distinguishing related from unrelated individuals and secondly, that even if they do distinguish siblings they “care” enough about them to leave them alone. Alternatively, aggression could be determined by physical assessment, where size differences inform tadpoles about the competitive ability of the other. In theory, we would imagine that when size differences are large between competitors that overall aggression is lower, as the risks of a smaller fighter becoming a meal are high when faced with a much larger cannibal.

Researchers were surprised to discover that cannibals care about the individuals they are faced to fight (up to a point). They found that large tadpoleswere half as aggressive towards their smaller siblings than towards non-siblings. In other words, cannibals are able to discriminate their siblings and change their behaviour accordingly.

Thanks to this study, we now have more information to better understand the apparently strange decisions parents make when depositing their young children in pools that are already occupied by cannibals -- ultimately, high-quality nurseries are hard to find in the jungle, and parents may rather deposit their young in a superior pool with an older, larger sibling who they believe may forfeit an easy meal for the sake of family.

Size-dependent aggression towards kin in a cannibalistic species

May the odds be in your favor: Relatedness and size interact in shaping cannibal aggression 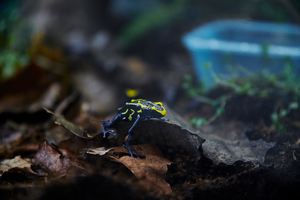