A new study led by Luísa Figueiredo, group leader at the Instituto de Medicina Molecular João Lobo Antunes (iMM; Portugal) and published today in the prestigious scientific journal Nature describes a new mechanism that decorates the end tails of RNA molecules, and prevents their degradation. This phenomenon, discovered for the first time in Trypanosoma brucei, the parasite that causes sleeping sickness, could be determinant for the virulence of the parasite. This fundamental discovery opens new avenues for treatment strategies for this disease but also for other RNA-based infections/diseases.

“RNA molecules are essentially the “messengers” that take the information encoded in genes to produce the machines that act inside cells of every single living organism, the proteins. But these molecules are mostly unstable, and the life expectancy of RNA molecules is an important determinant of gene expression”, starts to explain the leading researcher, Luísa Figueiredo. “Our lab studies Trypanosoma brucei, the parasite that causes sleeping sickness in humans. We have been keen to understand how this parasite causes disease in humans and cattle. There is a crucial protein in this process called VSG, a major cell-surface protein that has the ability to change periodically to evade the recognition of the parasites by the immune system.”

Now, the team has discovered that the ends of the RNA molecules that will produce the VSG are modified, resulting in a new level of regulation of the lifetime of these molecules. “Before the RNA is degraded, these endings, or tails, are progressively removed by the cell machinery. This is the first step in the degradation of RNA molecules that are no longer needed and is observed across all eukaryotes, including animals, plants, and parasites. What we have found is that in this VSG RNA molecules there is a modification that confers protection to degradation, similar to an “invisibility coat””, adds Idálio Viegas, PhD student and first author of this study. As these modified RNA molecules go unnoticed by the cell machinery, the degradation of the molecules is prevented.

And what is the relevance of this discovery for the infection with this parasite? “The VSG protein has the ability to change periodically to evade the recognition of the parasites by the immune system, and the regulation of the stability of these RNA molecules can be determinant for the virulence of the parasite. Therefore, the discovery of this new step can contribute for the development of new strategies to target sleeping sickness”, states Idálio Viegas.

“This discovery that the tails of RNA can be modified to control the lifetime of the molecules also alters the current perspective in RNA biology, opening new possibilities that have to be studied further. It’s likely that these modifications are also present in other eukaryotes, including humans and probably represent a general mechanism to regulate the lifetime of RNA molecules and gene expression in all eukaryotes, but so far have gone unnoticed”, adds Luísa Figueiredo.

This work was developed at iMM, in collaboration with researchers from the Cornell University (USA), and the University of York (UK). This study was funded by the Howard Hughes Medical Institute and the European Molecular Biology Organization. This work was also partially supported by FEEI - "Fundos Europeus Estruturais e de Investimento" and by national funds from FCT - "Fundação para a Ciência e a Tecnologia”.

Dressing up RNA molecules to last 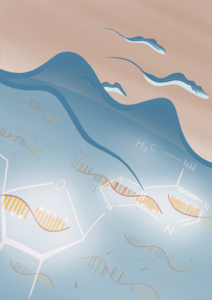