LA JOLLA, CA—Scientists at Scripps Research have unveiled a new tissue-clearing method for rendering large biological samples transparent. The method makes it easier than ever for scientists to visualize and study healthy and disease-related biological processes occurring across multiple organ systems.

Described in a paper in Nature Methods on March 28, 2022, and dubbed HYBRiD, the new method combines elements of the two main prior approaches to tissue-clearing technology, and should be more practical and scalable than either for large-sample applications.

“This is a simple and universal tissue-clearing technique for studies of large body parts or even entire animals,” says study senior author Li Ye, PhD, assistant professor of neuroscience at Scripps Research.

Tissue-clearing involves the use of solvents to remove molecules that make tissue opaque (such as fat), rendering the tissue optically transparent—while keeping most proteins and structures in place. Scientists commonly use genetically encoded or antibody-linked fluorescent beacons to mark active genes or other molecules of interest in a lab animal, and tissue-clearing in principle allows these beacons to be imaged all at once across the entire animal.

Scientists started developing tissue-clearing methods about 15 years ago, mainly for the purpose of tracing nerve connections within whole brains. While the methods work well for brains, they don’t work so well when applied to other body parts or whole bodies, which contain harder-to-dissolve structures.

“An ordinary lab generally can’t use these methods routinely and at scale,” says Yu Wang, a graduate student in the Ye laboratory who was co-first author of the paper.

The new method devised by Ye and his team uses a sequential combination of organic solvents and water-based detergents, and makes use of water-based hydrogels to protect those molecules within the tissue that need to be preserved. It often does not require the pumping of solvents through the sample.

“In many cases, you can just put the whole thing in a jar and keep it in a shaker on your benchtop until it’s done,” says co-first author Victoria Nudell, a research assistant in the Ye lab. “This makes it practical and scalable enough for routine use.”

The researchers demonstrated the ease and utility of their new method in a variety of applications. These included a collaboration with the laboratory of John Teijaro, PhD, associate professor of immunology and microbiology, to image SARS-CoV-2-infected cells in the whole chests of mice for the first time—a procedure whose simplicity, with the new method, enabled it to be done in a high-level biosafety facility where access to equipment is strictly limited.

Ye and his team are now working with their scientific collaborators on multiple applications of the new method, including the tracing of nerve pathways in the body.

The research was supported by the National Institutes of Health (DP2DK128800, K01DK114165), the Dana Foundation and the Baxter Foundation. 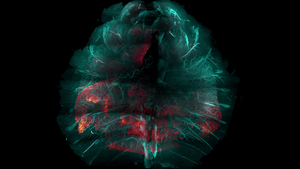