A global drama that underscores the violence, financial destruction and ecological decimation that can be wrought by organized crime swirls around a rotund bottom-dwelling marine animal – the sea cucumber.

While Sri Lanka has drawn much attention for the poaching and laundering of an unlikely luxury food, the recent collapse of once-thriving Mexican sea cucumber populations underscores the urgency of a new study that outlines the damage that can come to wildlife and people when crime engulfs international trade.

The international team of researchers examined media coverage of sea cucumber smuggling and poaching in Mexico from 2011 to 2021. Co-author Abigail Bennett, an assistant professor in Michigan State University’s (MSU) Center for Systems Integration and Sustainability, has been working with fishing communities in Mexico’s Yucatan Peninsula, bearing witness to the hardship and peril that comes when a wildlife species falls prey to criminal activity.

“Mexico has a long history of robust fisheries science and management coupled with strong community-level organization in the fisheries sector. Unfortunately, the social and environmental degradation from sea cucumber crime has been eroding some of this capacity, especially among small-scale fishing communities,” Bennett. “For example, in Yucatan, the sea cucumber fishery collapsed and is now closed, but the excess fishing capacity and labor facilitated by illegal buyers’ investments remain in many of the communities, creating problems for other species.”

The study found that between 2011 to 2021, over 100.6 metric tonnes of sea cucumbers were seized by Mexican and U.S. authorities, with an estimated value of $29.55 million, a number that only represents known thefts.

Sea cucumbers are a luxury food product in Asia and are used in traditional Chinese medicine. Sea cucumbers play a critical role in marine ecosystems. Acting like earthworms of the sea by cycling material in the seabed, they play an important role in nutrient cycling.

The price of sea cucumbers has been on the rise. The most common commercially exploited species in Mexico can sell for hundreds of dollars a kilogram in Hong Kong. Sea cucumber species are easy prey – they move slowly along the sea bottom and have no defenses. Collecting them out of season or without permits can be regarded as a low-risk, high-reward activity for criminals.

The study found that between 2011 to 2021, from the 97 incidents identified, over 100.6 metric tonnes of sea cucumbers were seized by Mexican and U.S. authorities, with an estimated value of $29.55 million.

“Mobilizing public support for the conservation of species that is ecologically and economically important, but also in essence is a lumpy tube with a mouth and anus, is considerably more challenging than a giant panda or baby seal,” said Phelps Bondaroff. “It is critical that we work to stamp out wildlife crime in sea cucumber fisheries.”

“Sea cucumber trafficking not only harms fish populations, it undermines local fishers’ livelihoods and undercuts the rule of law. Community-based crime prevention strategies hold a lot of promise for reducing harm to both people and fish,” said Meredith Gore, an associate professor in the Department of Geographical Sciences at University of Maryland whose research focuses on global environmental change.

The work is funded by supporters of OceansAsia, and by the U.S. Fish and Wildlife Service and the MSU Center for Latin American and Caribbean Studies. 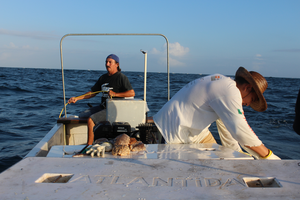