An international team of researchers, including several from the University of Hawai‘i (UH) at Mānoa, has quantified five critical ecological processes on more than 500 coral reefs worldwide to understand how these processes relate to each other, what may distinguish the most functional reefs, and what that means for our management of reef functioning.

Their work, published today in Nature Ecology and Evolution, demonstrates that five key functions performed by fish communities–the removal of algae, predation, biomass production, and the cycling of nitrogen and phosphorus– are inherently interconnected. As such, while the performance of these processes is influenced by the community structure of reef fishes on any given reef, no reef can maximize each of the five processes simultaneously.

Coral reefs are often described as the rainforests of the ocean. They host a high diversity of species and are very productive. Climate change and local threats, such as overfishing, have caused a stark decline in coral reefs worldwide, leaving scientists questioning whether future generations will still encounter healthy, ‘functional’ coral reefs. But what exactly makes a coral reef ‘functional’?

“Imagine a coral reef fish community swirling with small fishes that feed on algae,” explained Nina Schiettekatte, the lead author, former doctoral student at the Center for Island Research and Environmental Observatory and postdoctoral fellow at UH Mānoa’s Hawai‘i Institute of Marine Biology (HIMB). “This community will be characterized by high algal consumption and high biomass production, but it will have low phosphorus cycling because these species excrete very little phosphorus.”

This means that ecological processes on coral reefs worldwide are in a delicate balance, where it is impossible to maximize all processes. The researchers gained this knowledge by collecting data from individual fishes and combining it with a large dataset on fish communities worldwide.

“Throughout this project, we collected thousands of fishes across more than 100 species to gain detailed biological information on how they acquire and use energy and nutrients,” explained Jordan Casey, an Assistant Professor at the University of Texas at Austin.

This information can then be projected onto communities to understand how fish communities collectively move biomass and nutrients through the foodweb.

“Our work is novel because it quantifies multiple functions for the first time,” Valeriano Parravicini, Professor at EPHE in Perpignan, France stated. “Previously, most researchers have used the biomass of a fish community as a proxy for coral reef functioning but we show that it is critical to look beyond biomass and really disentangle the different components of functioning to understand how reefs work.”

Knowing that no reef can excel in all functions, the researchers asked whether there is a certain set of species that is more important than others. Surprisingly, they found that no single species was consistently important across its range, but half of all species were important in at least one location.

“This means that there are no global super-hero fish species for ecosystem functioning,” said Sébastien Villéger, researcher at the CNRS in Montpellier, France. “But there are many local super heroes.”

“This work really changes the way we need to think about coral reef conservation,” Simon Brandl, an Assistant Professor at the University of Texas at Austin concluded. “Since we cannot maximize all aspects of functioning, we clearly need to develop a more nuanced approach to conserving coral reefs that considers local species, ecosystem dynamics, and stakeholder needs.”

As coral reefs are experiencing more and more frequent disturbances, the development of such local-tailored management targets may become a race against time. 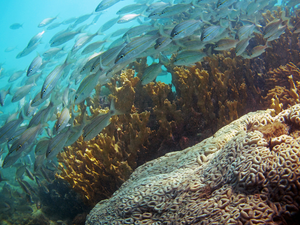 Coral and fishes on reef in Brazil