According to a paper published in Nature Communications, an important breakthrough about magnetic skyrmions was made by a research team led by Prof. DU Haifeng from High Magnetic Field Laboratory (HMFL), Hefei Institutes of Physical Science (HFIPS), Chinese Academy of Sciences (CAS), together with Prof. WANG Weiwei and Prof. SONG Dongsheng from Anhui University, China, and Prof. ZNAG Jiadong from the University of New Hampshire, USA.

This international collaborative research team realized the integrated manipulation of magnetic skyrmions by electrical currents, including the operations of writing, erasing and addressing a single skyrmion at room temperature in a CoZnMn nanostripe.

"It provided the principal foundation for constructing the skyrmion-based racetrack memories," said DU.

Since the prototype of skyrmion-based racetrack memory was first proposed in 2013, magnetic skyrmion has been considered as a promising data carrier for constructing the topological spintronic devices, magnetic skyrmion, a topological non-trivial vortex-like spin texture. It boasts the advantages of nanometer size, high topological stability, and ultra-low current density for driving.
However, the operations of skyrmions using current-induced spin-transfer-torque (STT) in bulk chiral magnets have progressed very slowly in the past decade as the three operations of writing, erasing, and addressing skyrmions and their integration in a single micro-device remain missing.

In this research, scientists designed and fabricated a customized chip for in-situ electrical Lorentz Transmission electron microscopy (TEM) experiments. Based on such a chip, the fabrication of the TEM microdevice was totally compatible with the conventional FIB lift-out method, making the whole process efficient.

In addition, with the previous experience of sample preparation by ion beam focus as reference, they prepared a nanostructured CoZnMn device with a uniform thickness and a flat surface. A notch with the size of ~280 nm at the edge was designed to be comparable to the size of a single magnetic skyrmion in CoZnMn (~110 nm). The nano-second current pulse was introduced to manipulate the magnetic skyrmions. By controlling the pulse width and current density, researchers realized the step-by-step creation and motion of magnetic skyrmions.

Aside from that, scientists found that the skyrmions could be eliminated around the notch by controlling the direction of electrical current.

At last, the integrated electrical control of creating, annihilating, and displacing of magnetic skyrmions was realized in one device, demonstrating the basic functions of writing, erasing and addressing data.

Prof. Du further explained details of the result. The critical current density is ~3.5×1010A/m2 for data writing, ~1.2×1010A/m2 for data erasing, and ~0.5×1010A/m2 for data addressing, which was almost one or two orders of magnitude lower than that for manipulating conventional magnetic domain walls, and demonstrated the low-power of skyrmion-based racetrack memories.

These experimental results have immediate significance towards the skyrmion-based memory or logic devices, according to the team.

Electrical manipulation of skyrmions in a chiral magnet 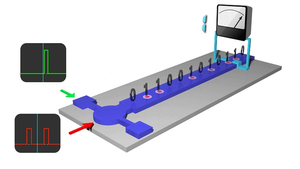