Such a heterostructure provides an avenue towards viable ultra-low energy future electronics, or even topological photovoltaics.

TOPOLOGICAL INSULATOR: THE FILLING IN THE SANDWICH

In the researchers’ new heterostructure, a ferromagnetic material forms the ‘bread’ of the sandwich, while a topological insulator (ie, a material displaying nontrivial topology) takes the place of the ‘filling’.

One promising architecture involves a sandwich structure comprising two single layers of MnBi2Te4 (a 2D ferromagnetic insulator) either side of ultra-thin Bi2Te3 in the middle (a topological insulator). This structure has been predicted to yield a robust QAH insulator phase with a bandgap well above the thermal energy available at room temperature (25 meV).

The magnetic origin of the gap was confirmed by the observing the bandgap vanishing above the Curie temperature, as well as broken time-reversal symmetry and the exchange-Rashba effect, in excellent agreement with density functional theory calculations.

This creates a large magnetic gap, with the heterostructure becoming a quantum anomalous Hall (QAH) insulator, such that the material becomes metallic (ie, electrically conducting) along its one-dimensional edges, whilst remaining electrically insulating in its interior. The almost-zero resistance along the 1D edges of the QAH insulator are what make it such a promising pathway towards next-generation, low-energy electronics.

MAKING THE RIGHT KIND OF SANDWICH

Yet, inducing sufficient magnetic order to open a sizable gap via magnetic proximity effects is challenging due to the undesired influence of the abrupt interface potential that arises due to lattice mismatch between the magnetic materials and topological insulator.

“To minimise the interface potential when inducing magnetic order via proximity, we needed to find a 2D ferromagnet that possessed similar chemical and structural properties to the 3D topological insulator” says Qile Li, who is also a PhD student with the Australian Research Council Centre for Excellence in Future Low-Energy Electronic Technologies (FLEET).

A single-septuple layer of the intrinsic magnetic topological insulator MnBi2Te4 is particularly promising, as it is a ferromagnetic insulator with a Curie temperature of 20 K.

“More importantly, this setup is structurally very similar to the well-known 3D topological insulator Bi2Te3, with a lattice mismatch of only 1%” says Dr Mark Edmonds, who is an associate investigator in FLEET.

The research team travelled to the Advanced Light Source part of the Lawrence Berkeley National Laboratory in Berkeley, USA, where they grew the ferromagnet/topological/ferromagnet heterostructures and investigated their electronic bandstructure in collaboration with beamline staff scientist Dr Sung-Kwan Mo.

“Although we cannot directly observe the QAH effect using angle-resolved photoemission spectroscopy (ARPES), we could use this technique to probe the size of the bandgap opening, and then confirm it is magnetic in origin,” says Dr Edmonds.

“By using angle-resolved photoemission we could also probe the hexagonal warping in the surface state. It turns out, the strength of the warping in the Dirac fermions in our heterostructure is almost twice as large as in Bi2Te3” says Dr Edmonds

The research team was also able to confirm the electronic structure, gap size and the temperature at which this MnBi2Te4/Bi2Te3/MnBi2Te4 heterostructure is likely to support the QHE effect by combining experimental ARPES observations with magnetic measurements to determine the Curie temperature (performed by FLEET associate investigator Dr David Cortie at the University of Wollongong) and first-principles density functional theory calculations performed by the group of Dr Shengyuan Yang (Singapore University of Technology and Design).

The study Large magnetic gap in a designer ferromagnet–topological insulator–ferromagnet heterostructure was published in Advanced Materials in March 2022 (DOI: 10.1002/adma.202107520).

The growth for this heterostructure was initially found in Edmonds Electronic Structure Laboratory at Monash University. Afterward, the heterostructure films were grown and characterized using ARPES measurements at the Advanced Light Source (Lawrence Berkeley National Laboratory) in California.

Making a ‘sandwich’ out of magnets and topological insulators, potential for lossless electronics 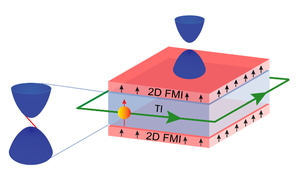 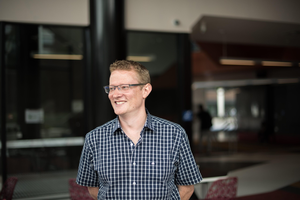