An international research team has discovered a new planet so young that it has yet to emerge from the womb of matter where it is forming. This is the youngest protoplanet discovered to date. It’s location and the surrounding patterns of matter suggest that an alternative method of planet formation may be at work. This discovery could help to explain the histories and features of extrasolar planets seen around other stars.

In the standard model of planet formation, a large Jupiter-like gas planet starts as a rocky core in a protoplanetary disk around a young star. This core then accretes gas from the disk, growing into a giant planet. While this model works well for the planets in the Solar System, it has trouble explaining exoplanets which have been discovered around other stars at distances much larger than the orbit of Neptune, the outermost Solar System planet.

Rocky cores aren’t expected to form far away from the central star, so core accretion can’t drive distant planet formation. One theory holds that outlying planets form close to the central star and move outwards. But new observations using an extreme adaptive optics system which allows the Subaru Telescope to directly image faint objects close to brighter stars show what appears to be a protoplanet in the process of forming directly at a distance of 93 au: over three times the distance between the Sun and Neptune.

Analysis of this object, named AB Aur b, shows that a simple model of starlight reflected from an anomaly in the disk can’t reproduce the observations; but neither can a model of a naked planet. The best fit models indicate that AB Aur b is a protoplanet so young that it is still forming in a womb of matter in the protoplanetary disk. Nearby spiral structures in the disk match models where a planet forms directly from the gravitational collapse of the surrounding matter. This discovery has profound implications for explaining the many observed outlying exoplanets and the overall theoretical model of planet formation.

``This study sheds new light on our understanding of the different ways that planets form,” says Thayne Currie, lead author of the discovery paper.

These results appeared as Currie et al. “Images of embedded Jovian planet formation at a wide separation around AB Aurigae” in Nature Astronomy on April 4, 2022.

The 8.2-meter Subaru Telescope is located near the summit of Maunakea in Hawai`i, an inactive volcano known for its unsurpassed qualities as an astronomy site and its deep personal and cultural significance to many Native Hawaiians. 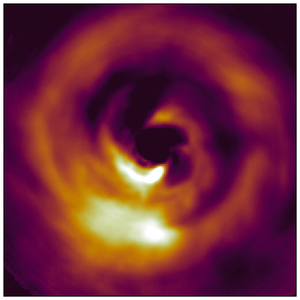 Image of the star AB Aurigae taken by the Subaru Telescope