Like diseases affecting humans, parasites can wage a deadly evolutionary “arms race” against their hosts. But can hosts and parasites upgrade their weapons at the same rate?

This can be a very unequal battle for two reasons. If the parasite is too successful it will wipe out its host, and therefore lose its only means of surviving. At the same time, evolutionary “wars” between hosts and their parasites depend on their rates of evolution; we can think of that as their ability to ‘upgrade their weapons’.

Flinders University researchers examined this conundrum by examining a social bee (Exoneura) and its social parasite, another bee (Inquilina).

“These parasitic species spend their entire life cycle within the nest of the host species and have extreme adaptations to social parasitism, they are not able to survive without their hosts,” says first author Dr Nahid Shokri-Bousjein in an article in Ecology and Evolution.

The ability of species to adapt to existential challenges depends on their ability to ‘discover’ new strategies via random mutations. The more individuals in a species, the greater the likelihood that a favorable mutation will arise amongst one of them, and that means that species with larger populations should generally win any “wars” against their enemies. So what happens when species and their parasites or pathogens have very different population sizes?

“We can see this problem play out with COVID-19. The virus has a much bigger population size than its host (us!), so its ability to evolve around our defenses is great,” says Dr Shokri-Bousjein. “We see this in terms of new COVID variants emerging and then spreading.”

But what happens when the pathogen has very small population sizes? “In our previous studies, we found that the population sizes of the parasite species are an order of magnitude lower than their host. Surprisingly, our analyses of molecular data showed that rates of evolution were similar between host and parasite.”

Flinders University Associate Professor Mike Schwarz says that “evolutionary wars between species and their enemies may be much more complex than we have thought. Large population sizes might allow more strategies to arise, but maybe the critical issue is how effective those strategies are. Species like these bee social parasites are on the very edge of survival: they might tell us something about how you can survive when your very existence is under threat.

There might be some lessons we can learn from these bees as we deal with the covid-19 pandemic.” 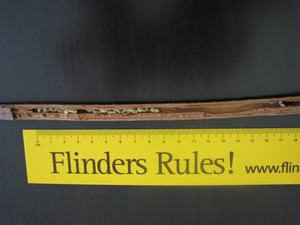