From Star Trek to Wolverine and Dune, instant wound healing has been a show-stealer in many science-fiction and fantasy films.

While science points to plasma medicine as a new way to increase the rate of healing or alter or sterilise heat-sensitive tissue, so far the application of low-temperature plasmas have been out of reach without accurate predictive models.

To progress matters, Australian and Asian researchers are experimenting with a liquid micro jet in a Flinders University vacuum chamber lab with a fundamental new approach to understanding electron transport into and within liquids to enhance plasma-liquid models.

In a new article just published in the International Journal of Molecular Sciences, researchers from James Cook University, Flinders University and the ANU, Canberra have used a simulation of a new experimental technique to determine accurate electron cross-sections in liquid using a micro-jet of water just 15 micrometres in diameter.

“Due to the high standards required in medical applications, developing our understanding of electron transport into and within liquids is critical for enhancing predictive power of plasma-liquid models,” says Flinders University Professor Michael Brunger.

Mr Muccignat, who is currently working with experts at Flinders University, has developed a Monte Carlo simulation of electron and positron transport through various mediums as part of extended honours and PhD work at James Cook University.

“The method allowed us to reasonably predict individual and two simultaneous electron scattering cross-sections which lays the foundation for a prediction of full, self-consistent cross-section sets in future studies,” he says.

Plasma is the fourth state of matter and exists as a cloud of high energy charged particles, including electrons, ions and neutral molecules.

The interaction of low-temperature plasmas, such as those developed with the heavy constituents at room temperature while electrons contain enough energy to drive reactions within a target, raise the prospect of new technologies and application in areas as diverse as medicine, synthesis of nanomaterials and even environmental remediation. 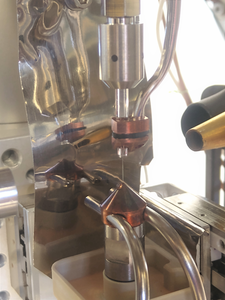