Recent changes in bird morphology - probably due to global warming

Researchers at Tel Aviv University have found changes in the morphology of many birds in Israel over the past 70 years, which they interpret to be a response to climate change. The body mass of some species decreased, while in others body length increased – in both cases increasing the ratio between surface area and volume. The researchers contend that these are strategies to facilitate heat loss to the environment. The researchers: "The birds evidently changed in response to the changing climate. However, this solution may not be fully adequate, especially as temperatures continue to rise."

The study was led by Prof. Shai Meiri and PhD student Shahar Dubiner of the School of Zoology, Wise Faculty of Life Sciences, and the Steinhardt Museum of Natural History at Tel Aviv University. The paper was published in the scientific journal Global Ecology and Biogeography.

Prof. Meiri explains that according to Bergmann's rule, formulated in the 19th century, members of bird and mammal species living in a cold climate tend to be larger than members of the same species living in a warmer climate. This is because the ratio of surface area to volume is higher in smaller animals, permitting more heat loss (an advantage in warm regions), and lower in larger bodies, minimizing heat loss (a benefit in colder climates). Based on this rule scientists have recently predicted that global warming will lead to a reduction in animal size, with a possible exception: birds living in the human environment (such as pigeons, house sparrows, and the hooded crow) may gain size due to increased food availability, a phenomenon already witnessed in mammals such as jackals and wolves.

Relying on the vast bird collection preserved by the Steinhardt Museum of Natural History at TAU, the researchers looked for changes in bird morphology over the past 70 years in Israel. They examined approximately 8,000 adult specimens of 106 different species – including migratory birds that annually pass through Israel (such as the common chiffchaff, white stork, and black buzzard), resident wild birds (like the Eurasian jay, Eurasian eagle-owl, and rock partridge), and commensal birds, that live near humans. They built a complex statistical model consisting of various parameters to assess morphological changes – in the birds' body mass, body length and wing length – during the relevant period.

Shahar Dubiner: "Our findings revealed a complicated picture. We identified two different types of morphological changes: some species had become lighter – their mass had decreased while their body length remained unchanged; while others had become longer – their body length had increased, while their mass remained unchanged. These together represent more than half of the species examined, but there was practically no overlap between the two groups – almost none of the birds had become both lighter and longer. We think that these are two different strategies for coping with the same problem, namely the rising temperatures. In both cases, the surface area to volume ratio is increased (by either increasing the numerator or reducing the denominator) - which helps the body lose heat to its environment. The opposite, namely a decrease in this ratio, was not observed in any of the species."

These findings were observed across the country, regardless of nutrition, and in all types of species: resident birds; commensal species living in the human environment – which, contrary to predictions, exhibited changes similar to those of other birds; and migrants. A difference was identified, however, between the two strategies: changes in body length tended to occur more in migrants, while changes in body mass were more typical of non-migratory birds. The very fact that such changes were found in migratory birds coming from Asia, Europe, and Africa, suggests that we are witnessing a global phenomenon. The study also found that the impact of climate change over time on bird morphology is 10 times greater than the impact of similar differences in temperature between geographical areas.

Shahar Dubiner: "Our findings indicate that global warming causes fast and significant changes in bird morphology. But what are the implications of these changes? Should we be concerned? Is this a problem, or rather an encouraging ability to adapt to a changing environment? Such morphological changes over a few decades probably do not represent an evolutionary adaptation, but rather certain phenotypic flexibility exhibited by the birds. We are concerned that over such a short period of time, there is a limit to the flexibility or evolutionary potential of these traits, and the birds might run out of effective solutions as temperatures continue to rise."

Recent changes in bird morphology - probably due to global warming 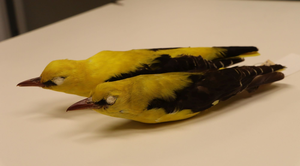 Historical Specimens from the collections of the Steinhardt Museum of Natural History. 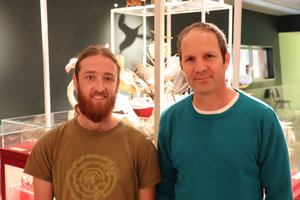