Gamma radiation detectors commonly used at nuclear power plants could be used to help archaeologists scan underground for new finds and could also be applied to discovering dinosaur bones, a new study has shown.

A gamma-ray spectrometer – normally used to identify radioactive contamination on nuclear sites – was used for the first time in an archaeological setting at a University of Reading excavation in Roman Silchester, Hampshire.

The trials found the devices were able to identify buried buildings or objects by detecting gamma radiation emitted during the natural decay of elements in these materials.

The detectors could therefore be a valuable addition to traditional geophysical surveys as they can reveal the composition of objects before they are excavated, and provide clues as to how old objects are, where they came from, or even what a site was used for thousands of years earlier.

Victoria Robinson, a PhD researcher in Archaeology at the University of Reading, who led the trial, said: “Confirming traditional surveys using a different technique is hugely valuable as it takes the guesswork out of archaeology. Until you have fully investigated a site you can never be quite sure what is under the ground, so the more information archaeologists have at their fingertips before they start digging, the better.

“Radiation detectors aren’t the first thing you’d think of to assist with excavations, but they could be a useful addition to an archaeologist’s toolkit. They are portable and highly versatile, which also offers an advantage over the technology that is currently used.”

A Groundhog Portable Gamma-Ray Spectrometer was tested on four sites at Silchester in summer 2019. The results are published in the Journal of Archaeological Prospection.

The detector was found to be most effective on the site of Silchester’s Roman temple, where it confirmed geophysical surveys locating a buried boundary wall. The position of the wall was indicated by lower radioactivity readings, suggesting the wall was constructed from materials imported from a different geographical area with naturally depleted radioactivity.

Mike Parker, Field Services Director at Nuvia, the nuclear technology company that manufactures the Groundhog detector, said: “It’s great to see that combining innovative technologies with creative thinking can provide technological advances in fields outside of their initial intended use, opening up new possibilities.”

Gamma-ray spectrometers pick up naturally-occurring uranium under the ground. As materials and objects are weathered, they release minerals containing uranium, which can then be absorbed by nearby objects such as bones over long periods of time. For this reason, dinosaur bones – normally the preserve of palaeontologists and usually only revealed by chance – could potentially be one of the most easily identifiable objects using the detectors.

The detectors penetrate up to a metre into the ground, taking gamma radiation readings at regular intervals to build up an image. They are particularly good at identifying materials that did not originate in the location, as these usually have a very different geochemical composition to the soil and objects surrounding them and therefore give contrasting radiation readings.

For example, the Welsh bluestone taken to Salisbury to build Stonehenge would be clearly distinguishable within the landscape. Firing clay bricks in a kiln also substantially changes their composition, making them easily detectable using a radiation detector. Places that hosted ancient industrial work such as this often have similarly altered waste material deposited across them, providing a further indication as to what the site was used for.

The gamma radiation detectors are more portable than these other technologies, and so can be used for high-resolution surveys while walking around or even mounted to vehicles to cover much larger areas.

The authors concluded that Gamma ray spectrometers could be used alongside other techniques to provide more certainty about what lies underground at archaeological sites. Further trials are planned, using more frequent readings to create a higher-resolution survey image, which could prove to be even clearer than those using other technologies. 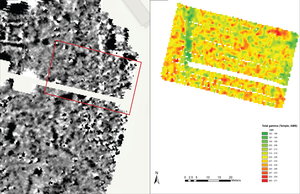