Researchers at Princeton University and Boston University have uncovered new insights into the role played by the earliest stages of the immune response to SARS-CoV-2 in determining whether patients develop mild or severe forms of COVID-19. The study, published April 3 in the journal Cell Reports, reveals an important role for immune cells known as macrophages and identifies a group of genes whose activation is associated with an effective antiviral response.

Two years into the COVID-19 pandemic, it is still unclear why some people infected with SARS-CoV-2 develop mild or no symptoms, while others develop severe disease. The different outcomes are likely to depend on a diverse class of immune cells known as myeloid cells, including macrophages, which encounter the virus in the lungs and produce various inflammatory and antiviral factors to begin fighting off the infection while the body produces specific antibodies and T cells to eliminate the virus.

“Different myeloid responses have been reported in mild/moderate and severe COVID-19 patients, indicating the importance of investigating these responses to elucidate the mechanisms that define the clinical outcome of infection,” said Alexander Ploss, an associate professor of molecular biology at Princeton and a co-author of the study.

Studying this early immune response is difficult: lung samples cannot be obtained from living patients, and laboratory animals may not respond to SARS-CoV-2 infection in the same way as humans. In the new study, Ploss and colleagues solve these problems by grafting human fetal lung tissue and human blood stem cells into immunodeficient mice. The stem cells can then be prompted to form a myeloid-rich immune system capable of mounting an immune response once the human lung tissue is infected with SARS-CoV-2.

This protection was associated with the infiltration of a particular type of myeloid cell, named macrophages, into infected lung tissue. The researchers also identified a set of 11 genes that are activated in HNFL mice infected with SARS-CoV-2 and that are likely to be involved in preventing the development of severe symptoms. For example, one of these genes, known as USP18, switches off a pro-inflammatory signaling pathway, and may therefore prevent prolonged inflammation from damaging lung tissue.

“Taken together, our study suggests that macrophages are critical early responders to SARS-CoV-2 infection, helping to coordinate a potent antiviral response within the lungs while preventing excessive tissue inflammation,” Douam said.

“HNFL mice represent a powerful, amenable and cost-effective platform to study myeloid immune cell responses that define the clinical outcome of SARS-CoV-2 infection in human lung tissue,” Ploss said. “The model, and its future refinements, could be instrumental in uncovering novel immunotherapy strategies against SARS-CoV-2 and in understanding the differences in disease caused by the original SARS-CoV2 strain and variants such as delta and omicron.”

The work was supported in part by the Peter Paul Career Development Professorship from Boston University, and by grants from the National Institutes of Health, the National Library of Medicine, the Deutsche Forschungsgemeinschaft, the American Cancer Society, Burroughs Wellcome Fund, Princeton University Office of the Dean for Research, Evergrande MassCPR, Uehara Memorial Foundation, and the Japan Society for the Promotion of Science. 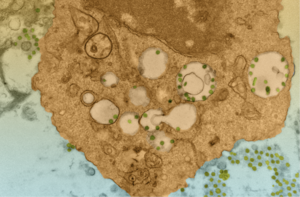 SARS-CoV-2 virus particles inside a macrophage