Whales are threatened by a variety of human activities off the West Coast of the United States, including fishing, ship traffic, and pollution. Overlap between these stressors can compound effects on whale populations, but are rarely addressed by current whale-protection policies in California, according to a study from the University of California, Davis.

The study, published for open access this week in the journal Marine Policy, examines the main causes of death for nine whale species in the California Current Ecosystem, which stretches from British Columbia, Canada to Baja California, Mexico. The whales considered in the study include humpback, gray, blue, fin, minke, sei, sperm, North Pacific right, and killer whales.

“We found that oftentimes, people single out fishing or ship strike for their roles in whale mortality,” said co-leading and corresponding author Eliza Oldach, a Ph.D. candidate at UC Davis with the Department of Environmental Science and Policy and the Coastal and Marine Sciences Institute. “But a whole slew of human activities have collided to make the modern ocean a really tough environment for whales to survive. We’re excited about efforts that look broadly to rebuild healthy oceans.”

“Gray whales migrate over 5,000 miles between their foraging and breeding grounds at either end of the California Current,” said co-leading author Helen Killeen, a Ph.D candidate at UC Davis with the Department of Environmental Science and Policy and the Coastal and Marine Sciences Institute. “Throughout their journey, they must pass through a gauntlet of human activities, all while contending with changes to their environment precipitated by climate change. The best conservation approach for these whales is one that addresses overlapping and interacting stressors that span geographic and jurisdictional boundaries.”

The study comes as the California Ocean Protection Council aims to develop a plan for achieving zero mortality for whales in the California Current Ecosystem this year. Achieving such a goal requires understanding the key drivers of whale deaths, opportunities for policy change and coordinated management across the ecosystem, the report said.

“In our research, we were inspired by a few cases where people and agencies are already collaborating to develop policies that tackle multiple stressors for whales," Oldach said. "Our paper is intended to highlight that approach and urge other policymakers to think along similar lines.”

The study was funded by the UC Davis Sustainable Oceans: From Policy to Science to Decisions program, a National Science Foundation Research Traineeship.

Managed and unmanaged whale mortality in the California Current Ecosystem

To save California's whales, put overlooked threats into policy 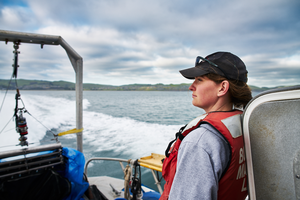