KNOXVILLE, Tenn. – How will climate change affect the walnuts we eat? That is what a team of researchers with the University of Tennessee Institute of Agriculture is asking in a new study.

“Characterizing the Responses of Thousand Canker Disease to Drought Using Omics” is now being funded through a $120,000 grant by the USDA Agriculture and Food Research Initiative. It is led by graduate student Aaron Onufrak and assisted by faculty mentors Denita Hadziabdic, assistant professor of Entomology and Plant Pathology, and Avat Shekoofa, assistant professor of Plant Sciences.

This team will further our understanding of the threat posed by climate change to walnuts, by first investigating how drought interacts with a disease that poses a massive threat to our walnut trees across the country. This disease known as Thousand Canker Disease (TCD) was first recognized in the early 2000s in the western United States, and was eventually found in Knox County, Tennessee in 2010. TCD is caused by a fungal pathogen and an insect, the walnut twig beetle. When the walnut twig beetle attacks a tree, it creates a tunnel beneath the bark, within which, the fungal pathogen grows. This fungus can limit a tree’s ability to transport water and sugar throughout its body, and can eventually kill the tree. Previous studies on TCD have noted that the disease appears to be more severe during drought periods, but the relationship between drought and the disease has never been formally investigated.

“This project, in the long-term, will lead to the development of a variety of management strategies for TCD. These strategies will aid in the protection of walnut trees, which are grown throughout the world for their wood and nut products and are also important components of natural forests,” said Aaron Onufrak.

For the next two years, the team will study the genetics of drought-stressed trees and compare it to well-watered trees, examining how the severity of TCD symptoms differs between these two treatments. Additionally, they will uncover how drought affects the walnut tree’s microbiome, or the microorgansims, such as fungi and bacteria, that interact with a plant. These microorganisms can play important roles in protecting the plant from disease or helping the plant get nutrients and water. They will then use this information to find strategies to help manage the disease, in the face of climate change.

“Walnut trees are not only a native species but also an agricultural commodity with an estimated value of more than $539 billion annually,” said Denita Hadziabdic. “This research will be the first to formally characterize the relationship between drought and TCD severity,” Onufrak continued.

Through its land-grant mission of research, teaching and extension, the University of Tennessee Institute of Agriculture touches lives and provides Real. Life. Solutions. utia.tennessee.edu. 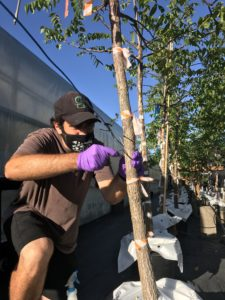 Taking a sample of walnut tree