A powerful radio-wave laser, called a ‘megamaser’, has been observed by the MeerKAT telescope in South Africa.

The record-breaking find is the most distant megamaser of its kind ever detected, at about five billion light years from Earth.

The light from the megamaser has travelled 58 thousand billion billion (58 followed by 21 zeros) kilometres to Earth.

The discovery was made by an international team of astronomers led by Dr Marcin Glowacki, who previously worked at the Inter-University Institute for Data Intensive Astronomy and the University of the Western Cape in South Africa.

Dr Glowacki, who is now based at the Curtin University node of the International Centre for Radio Astronomy Research (ICRAR) in Western Australia, said megamasers are usually created when two galaxies violently collide in the Universe.

“When galaxies collide, the gas they contain becomes extremely dense and can trigger concentrated beams of light to shoot out,” he said.

“This is the first hydroxyl megamaser of its kind to be observed by MeerKAT and the most distant seen by any telescope to date.

“It's impressive that, with just a single night of observations, we’ve already found a record-breaking megamaser. It shows just how good the telescope is.”

Dr Glowacki said the megamaser was detected on the first night of a survey involving more than 3000 hours of observations by the MeerKAT telescope.

The team is using MeerKAT to observe narrow regions of the sky extremely deeply and will measure atomic hydrogenin galaxies from the distant past to now. The combination of studying hydroxl masers and hydrogen will help astronomers better understand how the Universe has evolved over time.

“We have follow-up observations of the megamaser planned and hope to make many more discoveries,” Dr Glowacki said.

MeerKAT is a precursor instrument for the Square Kilometre Array—a global initiative to build the world’s largest radio telescopes in Western Australia and South Africa.

PUBLICATION
‘LADUMA: Discovery of a luminous OH megamaser at z > 0.5’, accepted for publication in The Astrophysical Journal Letters and available as a preprint at https://arxiv.org/abs/2204.02523.

MULTIMEDIA
Images are available from www.icrar.org/megamaser

MORE INFORMATION
Inter-University Institute for Data Intensive Astronomy
The Inter-university Institute for Data Intensive Astronomy is a partnership of three South African universities, the Universities of Cape Town, of the Western Cape and of Pretoria as well as the South African Radio Astronomy Observatory. The overarching goal of IDIA is to build within the South African university research community the capacity and expertise in data intensive research to enable global leadership on MeerKAT large survey projects and large projects on other SKA pathfinder telescopes.

MeerKAT
The South African MeerKAT radio telescope, situated 90 km outside the small Northern Cape town of Carnarvon, is a precursor to the Square Kilometre Array (SKA) telescope and will be integrated into the mid-frequency component of SKA Phase 1. The MeerKAT telescope is an array of 64 interlinked receptors (a receptor is the complete antenna structure, with the main reflector, sub-reflector and all receivers, digitisers and other electronics installed). The MeerKAT is built and operated by the South African Radio Astronomy Observatory. https://www.sarao.ac.za/science/meerkat/

LADUMA: Discovery of a luminous OH megamaser at z > 0.5 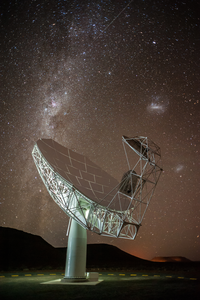 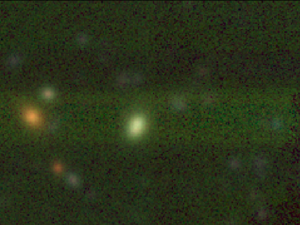 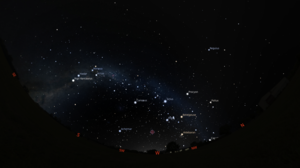 The megamaser's location in the sky.