The molecule trimethylamine N-oxide (TMAO) can be used to reversibly modulate the rigidity of microtubules, a key component of molecular machines and molecular robots.

Kinesin and microtubules (MTs) are major components of cytoskeleton in cells of living organisms. Kinesin and microtubules together play crucial roles in a wide range of cellular functions, most significantly intracellular transport. Recent developments in bioengineering and biotechnology allows for using these natural molecules as components of molecular machines and molecular robots. In vitro gliding assay has been the best platform to evaluate the potential of these biomolecules for molecular machines.

A team of scientists led by Assistant Professor Arif Md. Rashedul Kabir of Hokkaido University has reported a simple and straightforward method to reversibly and dynamically control the rigidity of kinesin propelled MTs. Their findings have been published in ACS Omega, a journal published by the American Chemical Society (ACS).

Kabir and his colleagues employed trimethylamine N-oxide (TMAO), a molecule that acts as an osmolyte in many deep-sea organisms, to study its effects on MTs in an in vitro gliding assay. TMAO is known to stabilize proteins under stressful or denaturing conditions of heat, pressure, and chemicals. The team demonstrated that TMAO affects the rigidity of MTs without depending on the need for any modifications to MT structures.

At relatively low TMAO concentrations (0 mM to 200 mM), MTs remained straight and rigid and the motion of the MTs in the gliding assay was unaffected. As the TMAO concentration was increased further, the MTs showed bending or buckling, and their velocity decreased. The team quantified this effect of TMAO on the conformation of the MT, showing that the persistence length, a measure of rigidity, of MTs was 285 ± 47 μm in the absence of TMAO and that decreased to 37 ± 4 μm in the presence of 1500 mM TMAO.

The team further demonstrated that the process was completely reversible, with MTs regaining their original persistence length and velocity when the TMAO was eliminated. These results confirmed that TMAO can be used to reversibly modulate the mechanical property and dynamic functions of MTs.

Finally, the team has investigated the mechanism by which TMAO alteres the rigidity of MTs. Based on their investigations, Dr. Arif Md. Rashedul Kabir and his team members concluded that TMAO mediates disruption of the uniformity in force applied by the kinesins along MTs in the gliding assay; the non-uniform force generated by the kinesins appeared to be responsible for the change in rigidity or persistence length of the kinesin propelled MTs.

“This study has demonstrated a facile method for regulating the MT rigidity reversibly in an in vitro gliding assay without depending on any modifications to the MT structures,” Kabir said. Future works will focus on elucidating the exact mechanism by which TMAO acts, as well as, on utilizing TMAO for controlling the properties and functions of MTs and kinesins, which in turn will be beneficial for the molecular machines and molecular robotics. 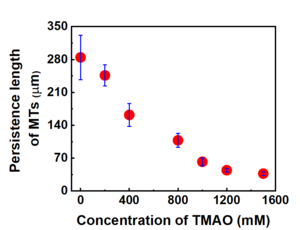