In 2020, seismologist Goran Ekström noticed a peculiar wiggle picked up on Nov. 28 by seismographs around the world. It emanated from a remote area in British Columbia’s steep, glaciated Central Coast Mountains, some 2,400 miles from Ekström’s office at Columbia University’s Lamont-Doherty Earth Observatory, in Palisades, N.Y.

“When I find something [that] looks a bit strange, I look at it more carefully,” said Ekström, who studies unusual seismic events. Conventional earthquakes usually begin with a big, high-frequency jolt, but this was not the case here. This was more of a low-frequency rumble that gradually accelerated before fading back—according to Ekström’s studies, the kind of signal produced by a big landslide. He emailed Marten Geertsema, a natural-hazards specialist with the BC provincial government. Seeing nothing in the news, Geertsema proceeded to scan recent satellite imagery of the area for signs of a disturbance, but couldn’t spot anything at first.

Around the same time, BC aviators heard about an unusual amount of wood floating in a fjord. They helicoptered in. Flying further up a river feeding the fjord, they saw countless mowed-down trees and a vast new wasteland of sand and gravel. Tracing up a side valley occupied by a stream called Elliot Creek, they found the source: the fresh scar of a gigantic landslide. It had hit a meltwater lake at the toe of the West Grenville Glacier and created a tsunami that devastated everything downstream. The scientists quickly connected the dots.

In a new paper in the journal Geophysical Research Letters, Geertsema, Ekström and colleagues describe the slide’s magnitude and effects, along with its possible causes—which include the rapid recession of the West Grenville Glacier, which has retreated some 4 kilometers from its mid-19th century position. It is only the latest such occurrence in a warming world where mountain glaciers are rapidly pulling back and creating conditions ripe for such collapses. The paper is accompanied by a spectacular visual interactive feature from the Hakai Institute, several of whose researchers contributed to the report.

Since 1900, there have been at least 1,000 known so-called glacial outburst floods worldwide. They have killed at least 12,500 people and devastated dams, towns, farms and wildlife habitat. Many occur in steep areas of the Himalayas; mountainous British Columbia and Southeast Alaska also are hot spots. While the causes can be complex, fast glacial retreat is a suspect in many cases. As ice pulls back through narrow ice-carved valleys, steep rock walls formerly held back by the ice are left fractured and barely hanging together. Often, a meltwater lake forms at the glacier’s toe. Time, precipitation, frost action and gravity do the rest. As a result, many scientists believe that landslides and resulting floods will increase as climate warms, if they are not already be doing so.

The new paper is one of the most complete analyses of a glacial outburst flood to date. The authors, from more than a dozen universities, government agencies and private research institutes, and the local Homalco and Xwe’malkwhu First Nations, used laser mapping, satellite imagery, seismic data and state-of-the-art computer simulations to model what happened.

They concluded that some 50 million tons rock—about the mass of all the automobiles in Canada—plummeted 1,000 meters down the valley wall into an unnamed meltwater lake at the glacier’s toe, and into the glacier itself. They say that some of the ice was probably instantly liquefied. Displaced water and sediment spurted up some 100 meters, then rushed in a wave down the 10-kilometer-long Elliot Creek valley at about 135 kilometers (84 miles) per hour, scouring out trees and soil. When it hit the adjoining Southgate River, debris piled up in a giant fan; floodwater and debris continued through the river to form a sediment plume more than 60 kilometers long in the downstream fjord.

No humans were killed, but the outburst destroyed large swaths of forest and salmon spawning habitat in the traditional lands of the Homalco people. Fisheries scientists think hundreds of thousands or even millions of fish were killed outright, and continuing turbidity in the watershed may be compromising fish survival. A logging camp with more than a dozen vehicles was wiped out, and fuel and hydraulic fluid continue to leak from the remains. There could be long-term effects on bears and eagles, who depend on the salmon, as do the native people.

The paper says the immediate trigger for the slide is unknown, but factors leading up to it “include fractured bedrock with favorably oriented joints and debuttressing of the base of the slope due to glacier retreat.” They characterize the event as “an example of a sometimes underappreciated hazard chain in high mountains undergoing rapid deglaciation. [Rapid] retreat may increase the hazards of these events as the number and size of lakes increase below potentially unstable slopes in alpine valleys.”

Ekström and his onetime Lamont-Doherty colleague Colin Stark began studying the possibility of detecting landslides using seismic signals around 2009. They have since documented more than 50 big events. The Elliot Creek slide is not even the biggest. In 2015, they detected the collapse of 200 million tons of rock at the base of Alaska’s Tyndall Glacier, under similar conditions. The following year, they detected a 120 million-ton collapse in Alaska’s Glacier Bay National Park.

With the hazard probably growing, scientists are looking into employing seismic instruments in real time to help authorities issue tsunami warnings and search for victims. For example, a 2020 study led by Lamont-Doherty scientists looked at a 1994 slide detected by seismic instruments hours before a subsequent tsunami reached a village in Bhutan, killing 21 people. If the instruments had been hooked to an early-warning system, people could have escaped. “This is a striking and scary reminder that [outburst floods] starting at these high altitudes pick up their devastating energy by gravity on their way downhill,” said Joerg Schaefer, one of the study’s authors.

The researchers in the new paper say that the close agreement between their physical modeling and the field evidence they gathered could be adapted to help predict future outbursts. “Fortunately, these and similar events in Western Canada have occurred in remote mountain valleys,” they write. “However, there is no assurance that this will be true in the future, given increased development and tourism in these remote areas.”

At a melting glacier, a landslide, then tsunami, signal climate-related threat 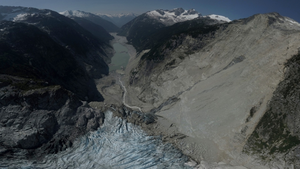