The Mid-Infrared Instrument (MIRI) and other Webb instruments have been cooling by radiating their thermal energy into the dark of space for the bulk of the last three months. The near-infrared instruments will operate at about 34 to 39 kelvins, cooling passively. But MIRI’s detectors will need to get a lot colder still, to be able to detect longer wavelength photons. This is where the MIRI cryocooler comes in.

“Over the last couple weeks, the cryocooler has been circulating cold helium gas past the MIRI optical bench, which will help cool it to about 15 kelvins. Soon, the cryocooler is about to experience the most challenging days of its mission. By operating cryogenic valves, the cryocooler will redirect the circulating helium gas and force it through a flow restriction. As the gas expands when exiting the restriction, it becomes colder, and can then bring the MIRI detectors to their cool operating temperature of below 7 kelvins. But first, the cryocooler must make it through the ‘pinch point’ – the transition through a range of temperatures near 15 kelvins, when the cryocooler’s ability to remove heat is at its lowest. Several time-critical valve and compressor operations will be performed in rapid succession, adjusted as indicated by MIRI cryocooler temperature and flow rate measurements. What is particularly challenging is that after the flow redirection, the cooling ability gets better as the temperature gets lower. On the flip side, if the cooling is not immediately achieved due to, for example, larger than modeled heat loads, MIRI will start warming.

“Once the cryocooler overcomes the remaining heat loads, it will settle into its lower-power steady science operation state for the rest of the mission. This pinch point event has been extensively practiced in the cryocooler testbed at NASA’s Jet Propulsion Laboratory (JPL), which manages the MIRI cryocooler, as well as during Webb testing at the agency’s Goddard Space Flight Center and Johnson Space Center. Performing it on orbit will be supported by the operations team comprised of personnel from JPL, Goddard, and the Space Telescope Science Institute. The MIRI cryocooler was developed by Northrop Grumman Space Systems. MIRI was developed as a 50/50 partnership between NASA and ESA (European Space Agency), with JPL leading the U.S. efforts and a multi-national consortium of European astronomical institutes contributing for ESA,” said Konstantin Penanen and Bret Naylor, cryocooler specialists, NASA JPL.

“MIRI stands out from Webb’s other instruments because it operates at much longer infrared wavelengths, compared to the other instruments that all begin with an ‘N’ for ‘near-infrared.’ MIRI will support the instrument suite to explore the infrared universe with depth and detail that are far beyond anything that has been available to astronomers to date.

“The imager promises to reveal astronomical targets ranging from nearby nebulae to distant interacting galaxies with a clarity and sensitivity far beyond what we’ve seen before. Our grasp on these glittering scientific treasures relies on MIRI being cooled to a temperature below the rest of the observatory, using its own dedicated refrigerator. Exoplanets at temperatures similar to Earth will shine most brightly in mid-infrared light. MIRI is therefore equipped with four coronagraphs, which have been carefully designed to detect such planets against the bright glare of their parent stars. The detailed colors of exo-giant planets (similar to our own Jupiter) can then be measured by MIRI’s two spectrometers to reveal chemical identities, abundances, and temperatures of the gases of their atmospheres (including water, ozone, methane, ammonia, and many more).

“Why so cold? MIRI’s state-of-the-art light sensitive detectors that are tuned to work in the mid-infrared are blind unless they are cooled below 7 kelvins (-266 degrees Celsius, or -447 degrees Fahrenheit). For contrast, a standard domestic freezer cools its contents to about 255 kelvins (-18 degrees Celsius, or -0.7 degrees Fahrenheit). At higher temperatures, any signal that may be detected from the sky is lost beneath the signal from its own internally generated ‘dark current.’ Even if the detectors are cooled, Webb images would still be swamped by the glow of thermal infrared light emitted by MIRI’s own mirrors and aluminum structure if they are to get warmer than 15 kelvins (-258 degrees Celsius, or -433 degrees Fahrenheit). The engineering solution was to stand MIRI off from the instrument mounting structure behind Webb’s primary mirror like a high-tech metal spider on six carbon fibre legs. These insulate MIRI from the much hotter telescope (where 45 kelvins, or -228 degrees Celsius/-379 degrees Fahrenheit, qualifies as hotter). The instrument’s body is also swathed in a shiny aluminum-coated thermal blanket, which reflects the radiant heat of its surroundings.

“Getting this instrument cold is one of the last major challenges faced by Webb before the MIRI team can truly relax, and passing through the cooler’s ‘pinch point’ will be the most daunting step in this challenge. At that time, the cooler will have pulled out almost all of the heat left in MIRI’s 100 kilograms (220 pounds) of metal and glass from that tropical launch day morning, three months ago. MIRI will be the last of Webb’s four instruments to open its eyes on the universe," said Alistair Glasse, Webb-MIRI Instrument Scientist, UK Astronomy Technology Centre and Macarena Garcia Marin, MIRI Instrument and Calibration Scientist, ESA.

The James Webb Space Telescope is the world’s largest, most powerful, and most complex space science telescope ever built. Webb will solve mysteries in our solar system, look beyond to distant worlds around other stars, and probe the mysterious structures and origins of our universe and our place in it. Webb is an international program led by NASA with its partners, ESA (European Space Agency) and the Canadian Space Agency.

Learn more about Webb at: 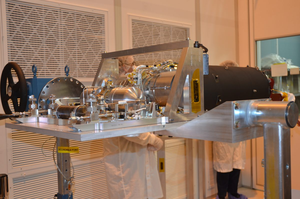