The direct band gap of AlN-based materials makes them suitable for fabricating DUV optoelectronic devices, which have a wide range of application prospects in the fields of curing, water and air disinfection, medicine and biochemistry etc. Therefore, achieving a high-quality epitaxy of AlN films is of particular importance to ensure the excellent performance of DUV photoelectric devices. Currently, due to the lack of cost-effective homogenous substrates, the optimal choice to grow AlN films is usually to perform heteroepitaxial growth on sapphire. Unfortunately, the inherent mismatches between AlN and sapphire substrate inevitably introduce a variety of crystalline defects into AlN epilayer. In particular, the large residual strain in the AlN film leads to the nonuniformity of the Al distribution in the upper AlGaN layer accompanied by wafer bending, which severely limits the device performance. Therefore, a feasible strategy is straightaway required to make a qualitative leap to realize high-quality growth of heteroepitaxial AlN films and to meet the application requirements of DUV optoelectronic devices.

Over recent years, an emerging method named quasi-van der Waals (QvdW) epitaxy or remote epitaxy based on two-dimensional (2D) material has been proposed for high-quality heteroepitaxial growth of group-III nitrides. As the widely studied 2D material, graphene has been incorporated as a buffer layer for the epitaxial growth of nitrides to effectively alleviate the lattice mismatch and thermal mismatch between the epilayer and the substrate. The previous reports of the epitaxial nitride film on graphene usually stated that the stress relaxation of epitaxial system was realized through the weak interaction between graphene and epilayers, but there is a lack of detailed discussion or rigorous verification of this statement. Recently, Dou et al. observed the chemical bond formation at the interface between the directly grown graphene and sapphire by aberration-corrected transmission electron microscopy and found the strong interaction between graphene and sapphire, which will inevitably subvert the traditional perception of stress relaxation via weak vdW interaction between graphene and substrate. Therefore, the QvdW epitaxy mechanism of AlN films on graphene deserves further exploration, which is essential to precisely manipulate the quality of AlN films and further elevate the performance of DUV optoelectronic devices.

In a new paper published in Light Science & Application, a team of scientists, led by Professor Tongbo Wei from Research and Development Center for Semiconductor Lighting Technology, Institute of Semiconductors, Chinese Academy of Sciences, Beijing, 100083, China, and co-workers have successfully achieved a high-quality strain-free AlN film through Gr-driving strain-pre-store engineering and presented the unique mechanism of strain-relaxation in QvdW epitaxy. Meanwhile, the strain-free AlN film grown on graphene/sapphire can be used as a reliable template layer for high-quality epitaxy of DUV-LED devices.

These summarize the highlights of their study:

“The dislocation density of AlN epilayer with graphene exhibits an anomalous sawtooth-like evolution during the QvdW epitaxy process and the values are consistently lower than that of on bare sapphire. Finally, graphene enables the AlN film to realize a 62.6% decrease of dislocation density.”

“First-principles calculation is introduced to elucidate the mechanism of graphene regulating the strain state of the AlN film. It is revealed that the plasma-treated graphene controls the initial nucleation morphology of AlN to pre-store sufficient tensile strain in the epilayer to compensate for the compressive strain caused by lattice and thermal mismatch during heteroepitaxy, thus bringing out a strain-free AlN film.”

“The reciprocal space mapping of the as-fabricated DUV-LED reveals a weak compressive strain in the 1.8 μm n-AlGaN layer, indicating that the strain-free AlN film as a reliable template layer enables the high-quality crystalline state of the upper LED epitaxial structure.”

“The as-fabricated 283 nm DUV LED with graphene exhibits 2.1 times higher light output power compared to its counterpart on bare sapphire and favorable stability of luminous wavelength under a current range from 10 mA to 80 mA, which is attributed to the better crystal quality with a weak residual strain of the epitaxial structure based on graphene.”

“This work reveals the internal mechanism of QvdW growth of nitride to improve the epitaxial quality on large-mismatched substrates and undoubtedly sheds light on the further promotion of nitride-based device manufacturing.” 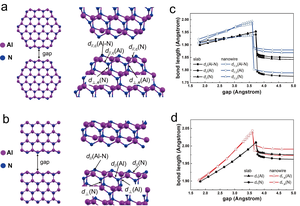 DFT calculations of the coalescence between two AlN surfaces. 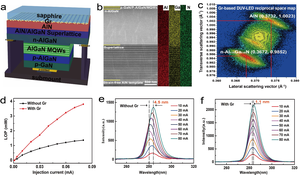 The structural characterization and EL properties of as-fabricated DUV-LEDs.