Hydrogen has attracted extensive attention from academia and industry as an energy source due to its intrinsic environmental compatibility, abundance, and high energy density (120 MJ kg−1). Electrocatalytic water splitting is an environmentally friendly route to produce hydrogen, especially when the electricity is from renewable sources that minimize carbon dioxide emissions throughout the process. The oxygen evolution reaction (OER) on the anode and hydrogen evolution reaction (HER) on the cathode are two half-reactions in electrocatalytic water splitting. Pt- and Ru/Ir-based compounds are the best-known high-performance noble metal electrocatalysts for HER and OER, respectively. However, the scarcity and high cost of such noble metals hamper their application in water electrolysis. Therefore, with global prospects, it is essential to develop earth-abundant non-noble metal electrocatalysts for next-generation water splitting technologies. Recently, Ni-based electrocatalysts have been confirmed to be effective for boosting electrocatalytic overall water splitting, but their performances are not high enough for large-scale hydrogen production.

In conclusion, by combining three strategies, Mn doping, heterostructure engineering, and applying 3D-nanosheet arrays, Mn-doped Ni2O3/Ni2P and Mn-doped NixSy/Ni2P are successfully fabricated by a facile hydrothermal reaction followed by phosphorization, and in the case of Mn-doped NixSy/Ni2P, sulfurization. High intrinsic activities are enabled by electronic modulation of the heterostructures and Mn doping, while abundant active sites are guaranteed by enlarged active surface areas from the 3D-nanosheet arrays. The combination cumulatively enhances the electrocatalytic activities toward HER, OER, and overall water splitting. 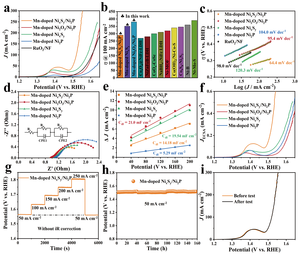 OER performances of the as-grown electrocatalysts. 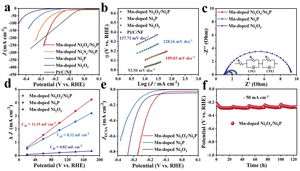 HER performances of the as-grown electrocatalysts. 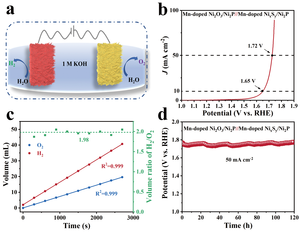