A recent study by researchers from the Chinese Academy of Sciences redefines how liquids maintain their contact with solid surfaces -also known as wettability - from an intermolecular force perspective.

The findings were published in Nano Research on Feb 8.

Wettability is relevant to the design of materials because it determines how layers stick together. Says study author and professor Ye Tian from the Key Laboratory of Bio-inspired Materials and Interfacial Science, it “plays a crucial role in many fields, such as the efficiency of catalytic reaction, separation, electrode materials, and the design of bionic smart materials.” For example, smart layers that change their contact depending on moisture could be used in sportswear that adapts to humidity.

High wettability means that a liquid drop spreads, creating a low angle of contact with the surface, whereas low wettability describes a liquid that resists spreading. Classically, wettability, as indicated by contact angle, is characterized using Young’s equation, which models an ideal, perfectly smooth surface. If the water droplet spreads out to a contact angle lower than 90 degrees, the surface is categorized as hydrophilic or water-loving. If the water droplet makes a contact angle higher than 90 degrees, the surface is categorized as hydrophobic.

However, Young’s model has limitations in explaining observed behavior of liquids in contact with solid surfaces. For example, it cannot explain why water contact angles increase after surfaces are roughened, which was described in a later Wenzel and Cassie model. The study authors, further, investigated the interactions of solid surfaces immersed in pure liquids at a molecular level to better understand how the intrinsic wetting thresholds (IWTs) – the points at which liquids spread or bead.  Says Tian “a series of studies have found that hydrophobic attraction can exist between apolar surfaces and hydrophilic repulsion between the polar surface(s) in water, that is, the IWTs should depend on the intermolecular forces.”

The researchers experimented with interactions of solids comprised of one-molecule-thick layers (self-assembled monolayers or SAMs) in different liquids to look at how wettability affected their attraction or repulsion. They chose water, ethylene glycol (EG), dimethyl sulfoxide (DMSA), and N,N-dimethyl formamide (DMF) as the testing liquids to represent a range of surface tensions. Using an atomic force microscope, they measured force curves for the adhesion forces between the SAMs in each liquid. Contact angles were assessed for 1 μL droplets of each liquid using a Contact Angle System, a device that measures analyzes drop shape and contact angle with the solid.

The results showed that for water, the intrinsic wetting threshold (IWT) occurred at a contact angle of 65° with the solid, not the 90° predicted by Young’s equation. In other words, 65° was the interface point between hydrophilic and hydrophobic behavior, which has to do with differences in the water’s hydrogen bond networks on either side of the threshold. Also, they found differences in the adhesion forces between the water layer and the hard surfaces (SAMs) with the transition at a contact angle of approximately 65°. Explains Tian, “we confirmed that the IWT for pure water is about 65° from the view of interaction forces between symmetrical SAMs.”

The other organic liquids lack hydrogen bonds, but still the IWTs were obtained by looking at changes in adhesion forces between the hard surfaces (SAMs) along with the contact angles. The results provided “a new curve of the IWTs, as distinct from the value defined by Young’s equation, which can be used to prejudge the IWTs for pure liquids with known surface tensions.”

The researchers plan to continue to study the mechanisms of wetting at a molecular level, given the significant applications to the design of functional materials. Having redefined the IWTs relative to Young’s historic equation, they expect to “provide a new perspective to understand the relationships between wettability and intermolecular force,” predicts Tian.

The paper is also available on SciOpen (https://www.sciopen.com/home) by Tsinghua University Press.

Nano Research is a peer-reviewed, international and interdisciplinary research journal, sponsored by Tsinghua University and the Chinese Chemical Society. It offers readers an attractive mix of authoritative and comprehensive reviews and original cutting-edge research papers. After more than 10 years of development, it has become one of the most influential academic journals in the nano field. Rapid review to ensure quick publication is a key feature of Nano Research. In 2020 InCites Journal Citation Reports, Nano Research has an Impact Factor of 8.897 (8.696, 5 years), the total cites reached 23150, and the number of highly cited papers reached 129, ranked among the top 2.5% of over 9000 academic journals, ranking first in China's international academic journals.

SciOpen is a professional open access resource for discovery of scientific and technical content published by the Tsinghua University Press and its publishing partners, providing the scholarly publishing community with innovative technology and market-leading capabilities. SciOpen provides end-to-end services across manuscript submission, peer review, content hosting, analytics, and identity management and expert advice to ensure each journal’s development by offering a range of options across all functions as Journal Layout, Production Services, Editorial Services, Marketing and Promotions, Online Functionality, etc. By digitalizing the publishing process, SciOpen widens the reach, deepens the impact, and accelerates the exchange of ideas. 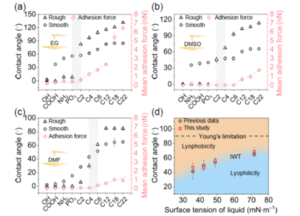 The determination of the IWTs for different liquids.