The International Space Station has spent more than two decades in low-Earth orbit serving as Earth’s orbiting laboratory. Groundbreaking research aboard the station in its unique microgravity environment has led to benefits back on the ground and paved the way for future deep space missions.

As NASA sets its sights once again on the Moon and eventually on Mars, low-Earth orbit is playing an even more critical role for achieving humanity’s ambitions in outer space. NASA has long supported commercial research aboard station sponsored by the ISS U.S. National Laboratory and has now even opened the space station for commercial activities such as private astronaut missions as part of its plan to develop a robust and competitive space economy.

Explore recent and upcoming commercial research aboard the orbiting laboratory:

During their eight days aboard the orbiting laboratory, the crew will conduct many Ax-1-specific experiments, including TESSERAE Ax-1. The study further tests self-assembly and docking of an autonomous, self-assembling robotic swarm of tiles in microgravity. The study builds on a previous test aboard station in 2020 in which seven tiles successfully self-assembled in microgravity. The investigation helps assess the feasibility of construction of satellites and space habitats in orbit to support future missions to the Moon and Mars and space tourism in low-Earth orbit. The ISS National Laboratory sponsors the experiment.

Nanoracks-GITAI Robotic Arm successfully demonstrated the versatility and dexterity in microgravity of a robot designed by Japanese company GITAI Japan Inc. The experiment was conducted under the pressurized environment inside the Nanoracks Bishop Airlock, the space station’s first commercial airlock. Results could support development of robotic labor to support crew activities and tasks as well as servicing, assembly, and manufacturing tasks while in orbit. Robotic support could lower costs and improve crew safety by having robots take on tasks that could otherwise expose crew members to additional hazards. The technology also has applications in extreme and potentially dangerous environments on Earth, including disaster relief, deep-sea excavation, and servicing nuclear power plants. The ISS National Laboratory sponsors the experiment.

Astronauts on the space station wear an item of clothing several times, then replace it with new clothes delivered on resupply missions. Limited cargo capacity makes this a challenge, and resupply is not an option for longer missions such as to the Moon and Mars. Procter & Gamble Company (P&G) has developed Tide Infinity, a fully degradable detergent formulated specifically for use in space. Their investigation, PGTIDE, studies the performance of the detergent’s stain removal ingredients and stability in microgravity. Space station crew members are involved in storing PGTIDE samples, flown to station aboard SpaceX’s 24th commercial resupply mission (SpaceX CRS-24), and conducting stain removal activities. If the technology is proven in space, P&G says it plans to use these cleaning methods and detergent to advance sustainable, low-resource-use laundry solutions here on Earth. The ISS National Laboratory sponsors the experiment.

The private astronauts aboard the Ax-1 mission will also work on Modeling Tumor Organoids in LEO (Ax-1). The experiment demonstrates processes for in-orbit pre-cancer and cancer cell culture confocal fluorescence microscopy, an important tool for biological research. It also seeks to provide real-time data transfer in support of future pre-cancer and cancer stem cell research. The investigation seeks to develop models that could inform and accelerate the development of countermeasures and enhance crew safety on future space missions. It could also provide tools for detection of and therapies for pre-cancer, cancer, and a variety of other diseases on Earth. The ISS National Laboratory sponsors the experiment.

Parts made in space

The ISS National Laboratory-sponsored Turbine SCM study tested a commercial manufacturing device that processes heat-resistant alloy parts in microgravity. Alloys are materials made up of at least two different chemical elements, one of which is a metal. Researchers expect more uniform microstructures and improved mechanical properties in superalloy parts processed in microgravity versus those processed on Earth. These superior materials could improve the performance of turbine engines in industries such as aerospace and power generation on Earth. Also launched aboard SpaceX CRS-24, Turbine SCM is operated remotely by U.S. company Redwire Space.

Coming home on a private mission

The Ax-1 private astronaut mission also enables a method for NASA to return additional scientific samples and station payloads to Earth. In addition to the private astronauts, some of the payloads the Ax-1 mission’s Crew Dragon is planned to carry home include:

Learn more about NASA’s plans for the commercialization of low-Earth orbit. 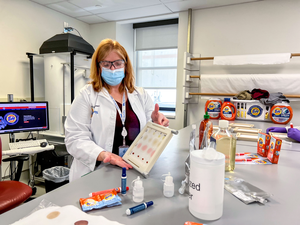 In support of the PGTIDE study, Kristi Niehaus, Tide scientist, Strategic Innovation & Technology at P&G, displays a stain set that will be used to test Tide detergent solutions aboard the International Space Station 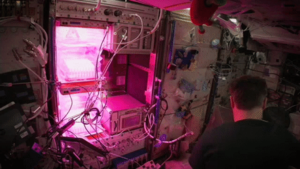 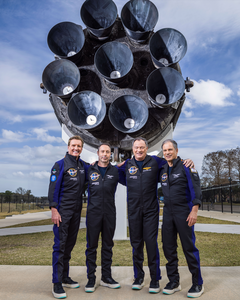