How do the lungs develop after taking their first breaths outside the womb? What cellular events and changes early in life give rise to lung malfunction and disease? To help answer these questions, scientists have constructed the first single-cell atlas of postnatal lung development in humans and mice.

The research could help provide a more detailed understanding—at the level of individual cells—of which genetic and epigenetic factors affect lung health across the human lifespan, starting from birth.

By analyzing lung tissue samples from newborn and young humans and mice, the researchers were able to gain insights on how certain cell types in the lung originate and change during childhood.

“These are unique samples that we’ve collected information on during a time in lung development that has not been well studied,” said first author Thu Elizabeth Duong, a physician-scientist in pediatric respiratory medicine at UC San Diego School of Medicine and pulmonologist at Rady Children’s Hospital-San Diego. “What’s exciting is being able to see, at single-cell resolution, what the lung cells are doing at this stage in development.”

The goal is to build a so-called “reference map” of the human lungs. Such a map would serve as a foundation to understand the cellular differences between healthy and diseased lungs. This work represents a small step toward building a reference for the pediatric population.

“Your respiratory health gets shaped by what happens during your early years of life. So when things go wrong, we can refer back to these early years to identify potential causes of disease,” said Duong.

“In cases of lung abnormality or disease, we can zoom in and examine what specific types of cells are different from their counterparts in the healthy references and what are the molecular pathways underlying these changes,” said Kun Zhang, professor and chair of bioengineering at UC San Diego who is a senior author of the study. “Diagnosis and treatment could then be developed based on differences from the reference map.”

The lungs are an important barrier in the body. They let in and maintain the balance of vital substances such as oxygen, while removing wastes such as carbon dioxide. And they filter the air that we breathe. The researchers hope that their findings here will lay the groundwork for more in-depth studies of how environmental factors such as exposure to air pollution and smoking influence lung health and disease throughout different stages of life.

With this analysis, the researchers could start to map developmental pathways for different lung cell types including alveolar epithelial type 1 cells. These cells are vital for the exchange of oxygen and carbon dioxide gases. The researchers gained clues as to how alveolar type 1 cells communicate with other cells such as myofibroblasts, and how this communication could play a role in alveolar cell development.

“These data are helping us piece together how key cell types in the lung come into existence,” said Duong. “We hope this will serve as a valuable resource for lung researchers moving forward.” 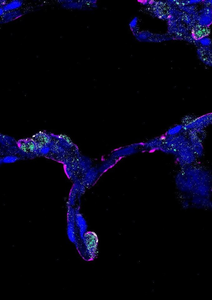