Organic long persistent luminescence (OLPL) materials are highly desired to overcome the shortcomings of traditional inorganic long persistent luminescence systems of aluminate, silicate, and sulphate-based matrices doped with rare-earth elements. However, the afterglow emission from most organic materials are phosphorescence (Phos) and thermal activated delayed florescence (TADF), their afterglow durations are usually limited to seconds level, far from comparable to the hour-level of inorganic LPL materials. In order to achieve OLPL, production of long-lived intermediates, such as charged-separated (CS) states, is one of the possible routes, which had been confirmed in certain electron-donating and electron-accepting organics blends. Unfortunately, the currently reported OLPL blends have to be fabricated under nitrogen atmosphere, so as to prevent quenching the charge-transfer (CT) states and CS states from oxygen and water. It is still a great challenge to realize OLPL under ambient conditions, particularly in aqueous media.

In a new paper published in Light: Science & Application, a team of scientists, led by Professor Hengwei Lin and Professor Kai Jiang from International Joint Research Center for Photo-responsive Molecules and Materials, School of Chemical and Material Engineering, Jiangnan University, China, and co-workers reported the preparation of the first carbon dots (CDs)-based organic blend (named m-CDs@CA) exhibiting superior LPL feature. The afterglow is observed to be more than one hour of duration via irradiation by a hand-hold UV lamp (365 nm). The afterglow intensity of m-CDs@CA after 10 s obeys an inverse power function of time t-1, indicating the LPL emission should be originated from newly-formed ultralong-lived emissive states, rather than the common triplet and/or singlet states (Phos and/or TADF). More impressively, this LPL material is applicable under ambient conditions and even in aqueous medium. Therefore, it could be used as inks and conveniently patterned on different substrates for diverse applications (e.g., lighting the emergency sign), as well as dispersed in epoxy resin for facilely fabricating luminous pearl. This work not only offers a very rare example of OLPL system that showing hour-level of robust afterglow, but also opens a new sight for the development and application of rare-earth-free OLPL materials.

Further studies clarified the origin of this robust OLPL. As the scientists proposed: “Notably, photo-induced electron transfer properties of CDs had been studied previously, which demonstrated that CDs can serve as either electron donors or electron acceptors. Given these findings, photo-induced CT and CS states might be obtained by properly designing CDs-organic molecule blends, consequently producing LPL”. Since the existence of CT and CS states were confirmed by the systematic photophysical investigations, the LPL of m-CDs@CA was originated from the exciplexes of m-CDs and CA. More importantly, the CA was in situ produced from urea during microwave heating process and bonded with m-CDs via C-N bond. Such in situ embedding of CDs in CA crystals and formation of covalent bond between CA and m-CD play critical roles in rigidifying the micro-environment of CT and CS states of the exciplexes, thus activating LPL of m-CDs@CA and preventing its quenching from oxygen and water.

Therefore, the scientists summarized that: “To realize such a purpose, the following conditions are needed to be considered: i) the energy levels of CDs and organic molecule should be fitted for electron transfer (i.e., the highest occupied molecular orbital (HOMO) and LUMO energy levels of donor being respectively higher than that of the acceptor); ii) CDs are better to be employed as the electron donors and immobilized into an appropriate electron-acceptor matrix, providing a rigid micro-environment to stabilize the CT and CS states; iii) formation of covalent bonds is preferred between the CDs and matrix molecule, so as to further stabilize the excited states and avoid quenching by oxygen and water”. These considerations could be preliminarily regarded as the basic principles for designing and preparing CDs-based OLPL blends.

“This study developed a facile strategy to prepare OLPL materials that being applicable under ambient conditions, which could not only effectively expand the scope of CDs-related research and applications, but also offer a new idea for designing OLPL systems with robust features.” the scientists forecast. 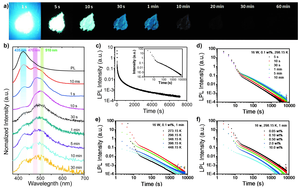 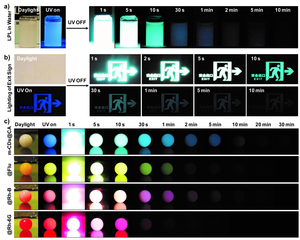 Figure 3| The robust OLPL feature of m-CDs@CA in aqueous media and their applications.