Electricity has formed the basis of many aspects of the modern world, from providing reliable sources of light to powering home appliances and computers. Now, researchers are studying how electricity can be harnessed as a treatment for certain types of cancer.

Kyle Wang, MD, explained that human cells naturally use electricity to line up certain cellular structures, including materials called mitotic spindles, that are used for cell division and growth. To prevent tumor cells from growing, an alternating electric field can be focused at the tumor to disrupt this process.

Electrical field treatment is being explored for a number of cancers throughout the body, but Wang said it has particularly been pursued as a treatment for glioblastomas, the most aggressive and deadly type of brain tumors. The treatment is delivered through a group of electrical arrays, a configuration of electrodes that looks like a mesh cap worn on the head, called an Optune device.

“These arrays point the electric fields at the area of the brain tumor,” said Wang, a University of Cincinnati Cancer Center member and assistant professor of clinical radiation oncology in the UC College of Medicine. “It’s been shown to actually improve how many people survive this disease.”

There is no set requirement, but Wang said in general patients are advised to wear the Optune device for at least 18 hours a day, with the longer the device is worn correlating with better outcomes. While treatment through Optune devices is not necessarily designed to continue indefinitely, Wang said patients typically continue wearing the device unless it is no longer effective or becomes too cumbersome to wear.

Wang is the site principal investigator of a new clinical trial, called TRIDENT, studying if starting treatment through the Optune device earlier will lead to better outcomes.

The Optune devices are currently approved by the Food and Drug Administration as a treatment for glioblastoma patients following surgery and radiation and at the same time as chemotherapy treatment, typically about three months after initial diagnosis. Wang said patients in previous trials who used the devices lived around 30% to 50% longer compared to patients who did not have the device.

“The idea and the hope is that by having the device earlier, and with it working together with radiation and chemotherapy, it can be even more effective than it was proven to be after radiation,” Wang said.

Treatment through the Optune device does not come with any of the typical side effects associated with radiation and chemotherapy treatment, Wang noted, with the most common side effects reported being skin irritation and logistical difficulties.

“It takes a lot of care to figure out how to wear something 18 hours a day that has to plug in to a portable electric source, but every patient that uses the Optune device gets a designated device specialist who makes sure they have almost 24/7 access to questions about how to use this device, how to bring it with them on trips and how to continue living well using this device that’s been shown to improve survival,” he said.

Out of 129 study locations around the world enrolling patients in the TRIDENT study, Wang said UC has been one of the leading enrollers of patients thus far. UC has enrolled 13 patients to date, with the overall study planning to enroll a total of 950 patients.

“Here at the University of Cincinnati, we have a lot of experience both with this device and this trial,” Wang said.

Wang said it is exciting to be at the forefront of a potential treatment for a disease that has been challenging to treat for many years.

“It’s been a long time since something was invented that works for this type of disease,” Wang said. “It’s really fulfilling to have patients that are looking for other options or basically reasons to have hope. I think this trial as well as the device is one of the more impactful discoveries for glioblastoma in decades.” 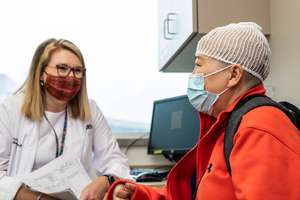