Howie’s targeted work to develop and advance women inventors was recognized by the Federal Laboratory Consortium with a national Rookie of the Year Award. The award honors just two employees or teams who are new to technology transfer and have demonstrated an ability to create meaningful impact above and beyond standard responsibilities.

“Inclusion and diversity are important in every way I can think of,” Howie said. “I was honored to be nominated for the award and humbled when I received it. I’m optimistic about Sandia’s future because we are constantly examining areas for improvement and this award demonstrates the national labs’ and the consortium’s continued commitment to diversity, equity and inclusion practices.”

The Federal Laboratory Consortium is a network that honors significant technology transfer accomplishments among more than 300 federal laboratories and research centers. The annual awards are some of the most prestigious awards for federal laboratories that demonstrate outstanding technology transfer achievements. Winners will be celebrated this summer during the consortium’s national meeting.

Since joining Sandia in 2019, Howie has focused on engaging with and educating women on inventorship and technology transfer at the labs and throughout the DOE enterprise. She serves as the Sandia staff lead for the Diversity and Inclusion in inVentorship and EntrepReneurship Strategies and Engagement-Women, or DIVERSE-W, program, which is funded by the DOE Office of Technology Transitions as part of its Practices to Accelerate the Commercialization of Technologies. The program was announced in October 2019 and launched the following year in partnership with 11 other national laboratories.

Howie’s team researched university technology transfer programs that hadn’t been adopted by federal laboratories. Early results at those universities showed positive impact following the creation of targeted inventorship programs for women and minorities. Even so, according to the Patent and Trademark Office, only 13% of patent inventors in 2019 were women. According to 2017 data from the National Bureau of Economic Research, women CEOs receive only 2.7% of all venture funding, and women of color receive only 0.2%.

“We can’t just count on the pipeline to backfill this issue and bring in more people,” Howie said. “We need targeted programs that bring women into the patent ecosystem.”

Combining ideas from university programs with national labs culture in a virtual environment due to the pandemic, Howie led the development of instructional programs, communication strategies and a 2021 speaker series for women inventors to increase awareness of and participation in technology transfer and commercialization activities.

The series focused on an overview of technology transfer and partnerships, specifics of the patent process, effective engagement and customer discovery, basics of entrepreneurial mindset and the value of networking. DIVERSE-W events drew more than 700 participants that year.

“Kelli has taken the time to understand the many different facets of technology transfer, from development of intellectual property to the execution of agreements,” said Joel Sikora, Sandia manager of Technology Partnership Agreements, Intellectual Property, and Business and Competitive Intelligence. “In her short time at Sandia, she has worked to increase the engagement of scientists in the disclosure process and has become a leading advocate at the DOE labs for increasing the involvement of women in innovation.”

In addition to her work on the DIVERSE-W program, Howie was appointed lead of the Inclusion, Diversity, Equity, Accountability and Solutions working group of the Quantum Systems Accelerator, one of five National Quantum Information Science Research Centers newly funded by the DOE in 2020. The Quantum Systems Accelerator is a multidisciplinary team comprising dozens of researchers from 15 labs and universities. Together, they are collaborating to transform rudimentary quantum computers and related technologies into machines that perform valuable work for the nation.

The IDEAS group that Howie leads is focused on growing quantum information science as a discipline that fosters innovation, engagement and psychological safety for all participants, including those from underrepresented backgrounds. She is working to create equitable access to resources and opportunities within the field.

From a young age, Howie began to see the importance of inclusion and diversity. As a teenager, she worked with students in public school English as a second language programs. Inspired by her experiences there, she helped develop a similar program, in partnership with churches in Texas, that provided English language instruction for families in the community.

Howie’s early career began in criminal defense as a paralegal. She then worked for seven years at the University of New Mexico on program development, operations and health equity research. In 2018, she received her master’s degree in business administration from the university. When she transferred to Sandia to focus on technology transfer, Howie brought her passions for writing, research, inclusion and diversity.

“In terms of technology transfer, I didn’t have any experience prior to coming on the job and once I got here, I felt like a sponge. It was all so fascinating to me,” Howie said. “How cool is it that we get to take amazing technologies from the national laboratories and find new purposes for them in industry? This creates dual use so that the public is getting the best of both worlds from everything we create.”

As a mother of two daughters who are both fascinated by science, Howie said creating targeted programs for women became personal.

“I hope that something like this kind of paves the way for them in the future,” she said. “Women were excluded from STEM for centuries, and as a result they are playing catch up, even today. The opportunities Sandia is establishing through these programs could help level the playing field so that when it comes to technology transfer, we’re bringing all talent into the equation and really tapping into an innovation pool that expands and grows when we include everybody at the table.”

Including everyone at the table 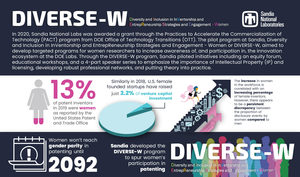