After males of the orb-weaving spider Philoponella prominens mate with a female, they quickly launch themselves away, researchers report on April 25 in the journal Current Biology. Using a mechanism that hadn’t been described before, the male spiders use a joint in their first pair of legs to immediately undertake a split-second catapult action, flinging themselves away from their partners at impressive speeds clocked at up to 88 centimeters per second (cm/s).

“We found that mating was always ended by a catapulting, which is so fast that common cameras could not record the details clearly,” says Shichang Zhang of Hubei University in Wuhan, China.

The reason the males catapult themselves is simple: to avoid being eaten by the female in an act of sexual cannibalism. The few males the researchers saw that didn’t catapult were promptly captured, killed, and consumed by their female partners. When the researchers prevented males from catapulting, they met the same fate.

Zhang and colleagues made this discovery while studying sexual selection in this spider, which lives in communal groups of up to 300 individuals in a web complex with many individual webs within it. Of 155 successful matings, they report that 152 ended with the male catapulting. All those catapulting males survived their sexual encounters.

The three males that didn’t catapult were killed. Another 30 prevented by the researchers from catapulting also got killed and eaten by the female. The researchers say that the findings show clearly that the catapulting behavior is required to avoid sexual cannibalism.

With high-resolution video cameras, the researchers calculated an average peak speed of catapulting spiders of about 65 cm/s. Speeds ranged from about 30 cm/s to almost 90 cm/s. They also accelerated at an average of about 200 m/s2. As they soar through the air, the males also spin around 175 times per second on average.

The males manage to catapult at these speeds by folding their tibia-metatarsus joint against the female. When released, hydraulic pressure allows for rapid expansion. The joint in question lacks extensor muscles in spiders, they explain.

“We observed that males that could not perform the catapulting were cannibalized by the female,” Zhang says. “It suggests that this behavior evolved to fight against female’s sexual cannibalism under strong predation pressure of females.

“Females may use this behavior to judge the quality of a male during mating,” he adds. “If a male could not perform catapulting, then kill it, and if a male could perform it multiple times, then accept its sperm.”

In future studies, they hope to explore the role of catapulting ability in male mating success.

This work was supported by the grants from the National Natural Science Foundation of China, the Ministry of Education AcRF grants from Singapore, and the Slovenian Research Agency. 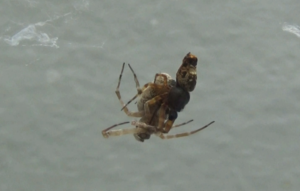 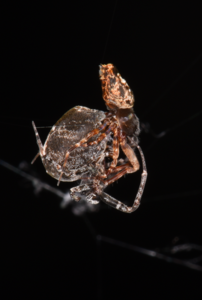