As race season approaches, many runners have the same goal: go faster. But in a study publishing April 28 in the journal Current Biology, researchers show that speeding up might require defying our natural biology. By combining data from runners monitored in a lab along with 37,000 runs recorded on wearable fitness trackers, scientists have found that humans’ natural tendency is to run at a speed that conserves caloric loss—something that racers seeking to shave time off their miles will have to overcome.

The research group, comprised of scientists from Queens University in Ontario and Stanford University in California, have been studying the mechanics of running in labs for 15 years but hadn’t gotten a chance to study running in the wild before now. “We were able to fuse the two datasets to gain new insights and combine the more messy wearable data with the gold standard lab experiments to learn about how people run out in the world,” says co-author Jennifer Hicks, deputy director of Stanford’s Wu Tsai Human Performance Alliance.

What surprised the team most was the consistency that they found across the combined datasets. “We intuitively assume that people run faster for shorter distances and then would slow their pace for longer distances,” says first author Jessica Selinger, a neuromechanics researcher at Queens University. But this wasn’t the case. Most of the runners analyzed stuck with the same speed, whether they were going for a short run or a long haul over ten kilometers.

From an evolutionary perspective, it makes sense that people would run at the speed that uses the least amount of energy. This caloric conservation is something that has been observed across the animal kingdom. But in the modern world, humans’ reasons for running have changed, and if the goal is speed, there are some tricks runners can use.

“Listening to music with a faster pace has been shown to help speed up stride frequency, which can then increase running speed,” said Selinger. In addition, picking faster running buddies can give you a boost.

Selinger and Hicks hope that having large pools of fitness data from wearables will help researchers to gain insights about populations. “You can look at connections with the built environment and access to recreation resources and start to layer all of that data to really understand how to improve physical activity and health more broadly,” says Hicks.

This work was supported by funding from the Natural Sciences and Engineering Research Council of Canada, the National Institutes of Health, the Wu Tsai Human Performance Alliance, and the Joe and Clara Tsai Foundation.

Humans run at the most energy-efficient speed, regardless of distance 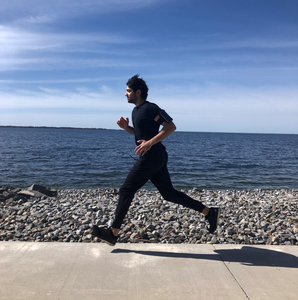