Scientists have discovered six new species of frog the size of a thumbnail in the forests of Mexico, with one earning the distinction of Mexico’s smallest frog.

All six species are smaller than a British 1p coin - around 15mm long - when fully grown. Adult males of the tiniest of these species, named Craugastor candelariensis, grow to only 13mm.

The newly discovered species are known as ‘direct-developing’ frogs: rather than hatching from eggs into tadpoles like most frogs, they emerge from the eggs as perfect miniature frogs. And they’re so small that they’re right at the bottom of the forest food chain.

“With millions of these frogs living in the leaf litter, we think they’re likely to play a hugely important role in the ecosystem as a source of food for everything else, from lizards to predatory birds,” said Jameson.

“Until now these new species have gone unnoticed because they’re small and brown and look really similar to other frogs,” said Tom Jameson, a researcher at the University of Cambridge’s Department of Zoology and University Museum of Zoology, who led the study.

“Their lifestyle is utterly fascinating,” he added. “These frogs live in the dark, humid leaf litter of the forests, which is like a secret world - we don’t really know anything about what goes on there. We don’t understand their behaviour, how they socialise, or how they breed.”

The study involved gathering almost 500 frog specimens from museums around the world, which had been collected in Mexico, and using new methods to categorise the relationships between them.

Using DNA sequencing, the team sorted the frogs into groups based on how similar their genes were. Then CT-scanning was used to create 3D models of the frogs’ skeletons, so that physical details could be compared. These two very different lines of evidence revealed six new species of frog.

“Frogs in the group known as Craugastor are very difficult to tell apart, so scientists have long suspected that more species may exist. We’re really excited to have discovered six new Craugastor species that are completely new to science,” said Jameson.

The new species have been named Craugastor bitonium, Craugastor candelariensis, Craugastor cueyatl, Craugastor polaclavus, Craugastor portilloensis, and Craugastor rubinus. Jameson is particularly pleased with the name cueyatl - it means ‘frog’ in the indigenous language, Nahuatl, spoken in the Valley of Mexico where this species was found.

“We chose the name cueyatl to honour the rich human history of the Valley of Mexico, and the local people who have probably known these frogs far longer than we have,” he said.

Known as ‘micro-endemics’, some of the newly discovered frogs may occur only in one small area, such as a hilltop in a certain part of Mexico. This makes them incredibly vulnerable.

“We named Craugastor rubinus after the garnet mines in the hillside where they’re found,” said Jameson. “Sadly, it will only take the expansion of one mine and these frogs could be gone.”

Habitat loss can also result from climate change. And the frogs are threatened by a deadly fungal disease, chytridiomycosis, that’s wiping out amphibian populations across the world.

But the researchers are hopeful that there’s a future for their tiny frogs. They have identified key protected areas throughout Mexico where the six new species live – and now hope to work with the government and NGOs in Mexico to connect these areas together.

“These frogs potentially play a really important role in the forest ecosystem,” said Jameson. “We need to make sure that they don’t just get wiped off the map because no-one even knows they’re there.”

He thinks there are probably many more species of Craugastor frog still to be discovered, simply because nobody has had a chance to look for them yet.

“We’ve looked at the maps of where the original expeditions went looking for frogs in Mexico, and found whole valleys and river systems where nobody went,” he said. “Because the tiny frogs live in tiny areas we can be pretty confident there’s a whole bunch of other undiscovered species there – all we have to do is go and find them.” 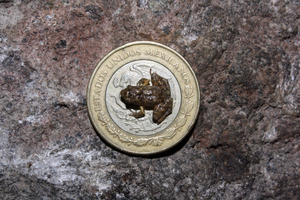 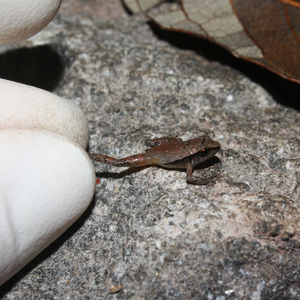 Craugastor rubinus in a researcher's fingertips 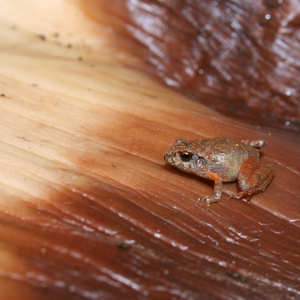 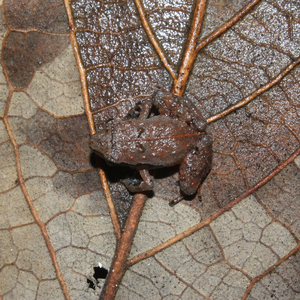 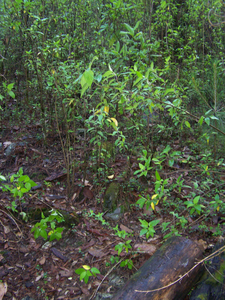 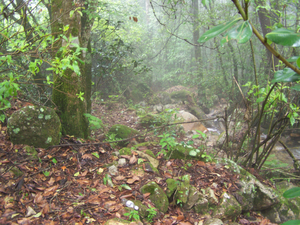