A team of Canadian researchers, including Inuit and other Indigenous researchers, have published the first study of Inuit surgical outcomes today in CMAJ Open. The study used data from The Ottawa Hospital, which is the quaternary care provider to the Qikiqtani-Qikiqtaaluk Region, home to half of the Nunavut Inuit population.

After matching Inuit with non-Inuit patients who had similar surgeries, age, and medical conditions, the researchers found that Nunavut Inuit were 25% more likely to experience serious complications after surgery. The study found the death or complication rate among the general population to be 16%.

The team had previously found that little research has been done on Indigenous Peoples’ outcomes after of surgery in Canada, and none about Inuit patients.

The researchers think these poorer outcomes may be due to barriers in accessing timely and culturally appropriate healthcare, causing Nunavut Inuit to arrive at surgery with more advanced disease which increases their risk of complications.

“We know from past research that the healthier you are when you walk into an operating room, the likelier you are to have good outcomes. Many Nunavut Inuit patients experience chronic health conditions, poor access to healthcare services, and delayed surgical care,” said Dr. Jason McVicar, lead author on the study and a Métis anesthesiologist at The Ottawa Hospital and assistant professor at the University of Ottawa. “Our study establishes a baseline for Inuit surgical outcomes that can be used to determine whether policy changes are having a real impact.”

The research team looked at outcomes one month after surgery for all inpatient surgeries at The Ottawa Hospital between 2011 and 2018, not including obstetric or cardiac surgeries. Nunavut Inuit patients made up 928 (0.9%) of the 98,701 surgeries.

Compared to non-Inuit patients, Nunavut Inuit had higher rates of hospital readmission, greater length of stay, higher cost of hospital care, and a greater chance of being sent to long-term care or other assisted living facility instead of going home after surgery.

“We’re seeing the impact of colonization in our operating rooms,” said Dr. Donna Kimmaliardjuk, study author and Inuk cardiac surgeon at Eastern Health, St. John’s. “To improve surgical outcomes for Inuit we need to start at the beginning, and work in partnership with Nunavut Inuit organizations to improve Inuit health and healthcare access. Some communities only have nursing station or a doctor two days a month, and that’s not enough to catch problems early.”

The researchers were able to identify Nunavut Inuit in this study thanks to a code in their Nunavut health card number that indicates they are an Inuit Land Claim Beneficiary. Indigenous identity data isn’t routinely collected by healthcare organizations, making this kind of research difficult. For example, patients from the large urban Inuit population in Ottawa could not be identified as Inuit in this study, because their Inuit identity is not collected in health data.

The researchers want to reassure Inuit patients who need surgery at The Ottawa Hospital that surgery is still very safe and that they will receive the best possible care.

“Nunavut Inuit patients should expect the same world-class care we all want for our loved-ones,” said Dr. McVicar. “The surgical procedure itself is not any different between an Inuk and a non-Inuk patient. However, we know travelling to the South involves language barriers, culture shock, racism and isolation from friends and family. That's why there are resources in place to support Nunavut patients coming to Ottawa for surgery.”

This study is part of a larger research program at The Ottawa Hospital and the University of Ottawa to better understand Indigenous Peoples’ experience of surgery in Canada. While this study looked at outcomes one month after surgery, the team’s next step is to use Nunavut health data to look at outcomes one year after surgery.

“The journey that leads to surgery is a saga that happens over years or decades,” said Dr. Nadine Caron, study author, general surgeon in Prince George and co-director of the Centre for Excellence in Indigenous Health at the University of British Columbia. “Our study only looked at one month of these patients’ care journeys. More research is needed to understand the complicated care journeys Nunavut Inuit patients must take across multiple healthcare systems in order to reduce barriers to care.”

The research team is also looking at the possibility of expanding the kinds of surgeries that can be done in Nunavut, so patients can receive care closer to home. The Ottawa Hospital and University of Ottawa already have partnerships with general surgery teams in Iqaluit that provide expertise, resources, and training to support surgeries that can be done in territory.

About The Ottawa Hospital
The Ottawa Hospital is one of Canada’s top learning and research hospitals, where excellent care is inspired by research and driven by compassion. As the third-largest employer in Ottawa, our support staff, researchers, nurses, physicians, and volunteers never stop seeking solutions to the most complex health-care challenges. Our multi-campus hospital, affiliated with the University of Ottawa, attracts some of the most influential scientific minds from around the world. Backed by generous support from the community, we are committed to providing the world-class, compassionate care we would want for our loved ones. www.ohri.ca

About the University of Ottawa
The University of Ottawa is home to over 50,000 students, faculty and staff, who live, work and study in both French and English. Our campus is a crossroads of cultures and ideas, where bold minds come together to inspire game-changing ideas. We are one of Canada’s top 10 research universities—our professors and researchers explore new approaches to today’s challenges. One of a handful of Canadian universities ranked among the top 200 in the world, we attract exceptional thinkers and welcome diverse perspectives from across the globe. www.uottawa.ca 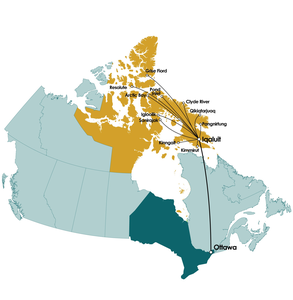 The patient referral pathway from Qikiqtani-Qikiqtaaluk Region to Ottawa