Tokyo, Japan – Researchers from Tokyo Metropolitan University have identified key similarities between the behavior of granular materials and melting gels. They found that falling beds of sand share the same destabilization mechanism as melting gelatin as it is heated from below, particularly how key parameters scale with the thickness of the fluidized region. Their findings provide important inroads into our understanding of destabilization under gravity, as seen in avalanches, landslides, and industrial transport processes.

Sand and jelly might not look much alike. But things change when we focus on their physical properties. Sand is made up of billions of grains of solid material, which can pour like a liquid, and clog pipes like a solid. Gelling materials like gelatin solutions pour like a liquid at high temperature, but suddenly take on solid-like properties when cooled. Looking at the microscopic details, we see that the solidity of gels is underpinned by networks of polymer or protein that crisscross a material; this is similar to how “force chains”, networks of grains pushing on each other, give rise to the apparent solidness of sand. This fascinating junction of solid and liquid-like behavior forms the backbone of a lot of natural phenomena like avalanches and landslides but is still poorly understood.

These similarities inspired Dr Kazuya Kobayashi and Professor Rei Kurita of Tokyo Metropolitan University to directly compare physical gels and beds of sand as they fluidize. They observed the fluidization of thin beds of sand and gelatin solutions using high speed cameras. For sand, pre-formed beds of grains in either air or water were inverted and observed as the base begins to fall out. For gelatin, two layers with different concentrations of gelatin were prepared, one on top of the other. The concentrations were chosen so the lower layer would completely fluidize first. As the material is heated from below, the upper layer would destabilize and begin to fall.

In both systems, the team found fingering instabilities, where thin fingers of material fall into the material (or air/water) below, resembling rain droplets falling down a window.  Over time, new fingers would appear in between existing ones, and the interface between the liquid and solid-like parts would recede. By using a special imaging technique, the team were also able to identify a “fluidized” interface region above where the fingers actually start. The thickness of this region was found to be strongly correlated to key parameters like the velocity at which the front recedes, and the distance between the fingers. This kind of relationship is called a “scaling” relationship and is important in physics for connecting phenomena which might seem different initially but might be related at a deeper level through their mechanisms. In this case, this is strong evidence for how the similarities between the materials i.e., the connectivity of a force-bearing network, underlies their macroscopic physical behavior.

Through their extensive experiments, the team’s work offers valuable insights into how granular materials and gels destabilize under gravity, with implications for both fluidization phenomena in nature and the design of transport systems for granular materials on industrial scales.

What do jelly and sand have in common? 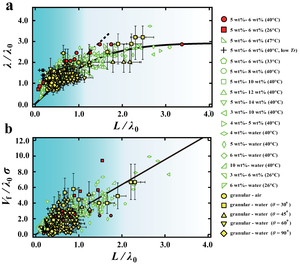 Scaling of key parameters with thickness of fluidized region.