In a new paper published in Light Science & Application, a team of scientists, led by Professor Songnan Qu from Joint Key Laboratory of the Ministry of Education, Institute of Applied Physics and Materials Engineering, University of Macau, Taipa, Macau SAR, China, and co-workers have developed we a facile one step solvothermal synthesis of red emissive FA-CDs from citric acid and urea in FA without complicated purification procedures. By comparing the optical properties and chemical structures of the solvothermal synthesized samples in different solvents (Figure 1), the high content of electron-withdrawing C=O groups and low content of proton-donating −NH and −OH groups on the surface of FA-CDs account for their pure red emission. After composing with BSA, high PLQY up to 21.9% and significantly enhanced multi-photon red FL were realized in FA-CDs@BSA aqueous solutions.(Figure 2) Both FA-CDs and FA-CDs@BSA exhibited very low cytotoxicity and were renally excreted in vivo. More important, clearly in vivo red FL tumor imaging and two-photon red FL imaging of mouse ear vessels were realized via intravenous injection of FA-CDs@BSA aqueous solutions. (Figure 3)

“To our best knowledge, this is the first time of realizing two-photon FL imaging in mammals in vivo based on CDs. We prospect this study can promote the rational design of low-cost strong red/NIR emissive CDs in aqueous system for their high performance biological applications.” the scientists said. 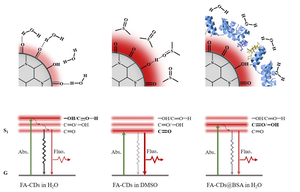 Figure 2 | Schematic diagram of possible surface environments and energy level alignments of FA-CDs in water, DMSO and after combining with BSA in water. 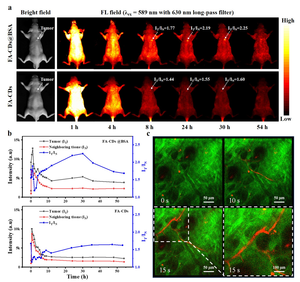