The blue whale is the largest animal that has ever existed, weighting as much as two thousand people together. This is why this cetacean was the most chased species in the world due to its size and economic yield when whaling started, around mid-19th century. The first captures, in northern Norway, expanded to other marine areas, and in only a few decades, in the North Atlantic, more than 15,000 blue whales were caught. By early 20th century, the populations of the blue whale, which were already small, decreased in many areas of the North Atlantic Ocean, and the species was replaced by the rorqual as the main whaling boats’ commercial target.

These are some of the conclusions of the article published in the journal Scientific Reports, signed by the experts Àlex Aguilar and Assumpció Borrell, from the Faculty of Biology and the Biodiversity Research Institute of the University of Barcelona (IRBio). The paper collects data on the blue whale captures during the 20th century in the temperate waters of the North Atlantic, an oceanic area where whaling continued until 1979, regardless of the protection of the species, which started in 1954.

The blue whale (Balaenoptera musculus) is the largest cetacean —it can exceed 30 meters and weight more than 190 tons— and it belongs to the mysticeti group, whales with beards. This is a large-distance migratory whale, and it mostly feeds from krill and small fish. It is listed as an endangered species by the International Union for the Conservation of Nature (IUCN).

The new study analyses the internal records of whaling (whaling boats’ logbooks, companies’ internal records, etc.) which took place in the temperate waters of the North Atlantic during the 1921-1985 period. This information is contrasted to data provided by the science papers and fishery inspection studies from the 1981-1987 period. Official statistics on whaling, so far, the only available information source, “were often falsified and hid almost half of the captures”, notes Professor Àlex Aguilar, head of the UB Research Group on Large Marine Vertebrates.

The data show a total of 61 catches of blue whales in 55 years (1.12 individuals per year), half of which were never reported. Specifically, the data from the 1950s reveal captures of some large common rorquals —or fin whale— (Balaenoptera physalus), “but it is unclear whether this corresponds to a misidentification of the species or a mistake in the measurements of the individual, so we cannot rule out whether the actual number of caught blue whales was slightly higher than the estimated number”, notes the lecturer Assumpció Borrell, from the Department of Evolutionary Biology, Ecology and Environmental Sciences, and member of IRBio.

When the first modern factories started working in the Iberian Peninsula, in 1921, the blue whale was a rare species and the exploitation was focused on the common rorqual, which was smaller but more abundant. “This did not stop the harpooners from catching a blue whale when they found one. Actually, the last blue whale to be caught in the world was captured in 1979 by a Spanish company, Industria Ballenera SA, in Galician waters”, says Aguilar.

The average length of the reported blue whales captured in peninsular waters, most of them being juvenile, was lower than that of specimens from higher latitudes. “These data would indicate a geographical stratification of the population, with a higher proportion of immature specimens in temperate waters and the adult population moving to higher latitudes and cooler waters”, note the authors.

During the 20th century, there were two different periods in whaling in the Atlantic coasts. In the 1920s —at the peak of the expansion of Norwegian companies— there was large-scale fishing, with many boats and both land and floating factories. The result was unsustainable and lead to a sharp decline of blue whale populations.

In a second phase, from the 1940s to 1985, the exploitation was moderate, with only land factories and a modest number of whaling boats. Although the International Whaling Commission (IWC) regulated the protection of the species in 1954, Spain was not a member at the time and the catches continued there until 1979. Once the Commission regulated the operations in Spin, with fees and inspections, the operations were fully sustainable. The moratorium on whaling, which came into force in 1986 —and which was accepted by Spain— put an end to six decades of intense exploitation.

The current population of whales exceeds one thousand in the South Atlantic, while there are approximately between 4,000 and 5,000 specimens in the eastern side of the North Atlantic. “The most determining factor in the recovery of the species in the peninsular coasts has been the protection. The recovery was slow at first —the number of specimens was very low—, but in the last decade and a half, the populational increase of the blue whale is visible, for instance, in Galician waters”, states Aguilar.

At the moment, fishing is no longer a problem for the conservation of whales. The populations that are exploited in Norway, Japan, Island, the United States and Russia are at healthy levels and the figures of catches are below the rate at which individuals are being restocked. “However, there are other factors which look alarming. In the Mediterranean, for instance, whale deaths due to collisions with boats are too frequent. The consequences of climate change are also worrying, although it is unclear whether it will have a negative effect, there are some studies that note it could favour some species”, say the authors.

Apart from the economic aspects, commercial whaling has left a historical and architectural mark in some countries. In Spain, one of the actions by some administrations to categorise whaling factories as assets did not prevent the deterioration of many facilities, which have now disappeared or have become runes.

“In this sense, the difference with other countries with a whaling tradition is notable. Just think about the IBSA I case, the last Spanish fishing vessel, which was 48 meters long. In 1989, it was acquired by the Sandefjord Museum (Norway) for 1,000 pesetas (6 euros) when it was about to be broken up. It is now called Southern Actor, and it is the main tourist attraction of this museum”, concludes Àlex Aguilar.

Unreported catches, impact of whaling and current status of bluewhales in the South European Atlantic Shelf 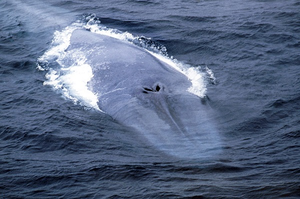 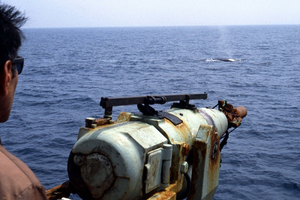