Millions of monarch butterflies migrate each fall to a specific cluster of mountain peaks in central Mexico. How exactly they navigate to their winter home, and the way they choose their path, is a topic of great interest to scientists—especially as climate change redirects their chosen path.

Inhee Lee, assistant professor of electrical and computer engineering at the University of Pittsburgh, is part of a team developing a tracking system that could be attached to monarch butterflies and transmit data about their location all throughout the three month journey south. A paper detailing these findings recently won the Best Paper Award at the MobiCom 2021 Conference.

“Tracking animal migration is a critical ecosystem indicator,” said Lee. “Migrators travel long distances across entire continents, and it can give us unprecedented insight into their migratory paths, how the environment around them is changing, and how species interactions are impacted by changing movements and distributions.”

Previously, only larger animal migrators can be tracked for significant portions of their migration. Insect migrators, however, make up an enormous portion of the total migrators across the world. To track them, researchers have created a new wireless sensing platform called mSAIL, specifically designed for monarch migration.

The tiny, 62 mg, 8×8×2.6 mm chip is attached to the butterfly’s back and can simultaneously measure light intensity and temperature, wirelessly communicating that information back to researchers once the butterflies reach their destination. The system will use a deep learning-based localization algorithm to reconstruct the butterfly’s migration trajectory after it has made the journey.

To test the potential of mSAIL, researchers attached the system to a live monarch butterfly in a botanical garden. The chip was glued to the butterfly; it had no issue flying, opening and closing its wings, or engaging in any other normal butterfly behaviors with the chip in place.

mSAIL is an extension of work that Lee completed while an assistant research scientist at the University of Michigan. mSAIL integrates previously developed integrated circuits within a 3D-stacked form factor and demonstrates, for the first time, the feasibility of individual butterfly localization and tracking using the novel embedded system.

The next step of the project is to mass produce over 100 mSAIL sensors that can reliably operate during the three-month monarch migration period. The researchers will release the mSAIL-equipped butterflies at various locations in the U.S. and will check in with the sensors at the butterflies’ well-established resting spots—such as in the western Lake Erie archipelago—and at the final overwintering site in central Mexico. Eventually, the team hopes to add an air pressure sensor to mSAIL, which will allow it to determine altitude and more accurately assess the butterflies’ path.

A mission to monitor migrating monarchs 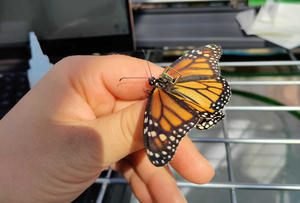