There is no room for compromise when it comes to steel cables for bridge construction: They have to withstand enormous forces for many years. Before a bridge is built, the steel cables and their anchorages have to be tested extensively, according to precise test specifications.

These tests are usually very elaborate and require a lot of time and energy. However, a completely new testing method for bridge cables has now been developed at TU Wien (Vienna): The cable is clamped in a device weighing several tonnes and made to vibrate at its own resonance frequency. In this way, it can be loaded up to 30 times per second - thus obtaining reliable data on the continuous vibration behaviour in the course of just one day. The facility is now being operated by the TU Wien and TÜV Austria TVFA at the Science Center of TU Wien.

New idea for bridge cable tests
Prof. Johann Kollegger from the Institute for Structural Engineering at the TU Vienna has been working on bridge construction for many years. Several innovative bridge designs were developed by him, and he also had the idea for the novel test method for bridge cables several years ago. Smaller versions of the test facility have been built at the TU Wien over the years, and now it has finally been possible to set up a full-size facility of this kind and use it to carry out experiments on cables of the kind needed for the construction of large cable-stayed bridges.

The testing machine has now successfully completed its first real load test: A stay cable system with 151 strands was successfully tested, with over two million load changes and a cyclic load between 1450 tonnes and 1900 tonnes. The main person responsible for this work is civil engineer Dr Wolfgang Träger.

"Until now, if you wanted to test large steel cables, you had to subject them to extreme forces in servo-hydraulic testing facilities over and over again - about once every one to two seconds, for one or two months," says Wolfgang Träger. "After about two million such load changes, you can finally tell whether the cable has sufficient fatigue strength."

The high-tech vibrating machine
At TU Wien, however, things are done quite differently: a twenty-tonne steel frame is lashed between two cables - on one side there is the cable that is to be tested, on the other a strong  auxiliary cable. Two rotating masses are built into this so-called coupling unit. When they are set in motion, the whole steel frame starts to vibrate – much like an unevenly loaded washing machine starts to vibrate. In contrast to the washing machine, however, which shakes quite unpredictably in different directions, the vibration in the experimental facility can be controlled precisely: shaking takes place exactly in the direction of the cables, with precisely specified frequency and amplitude.

"We adjust the vibration so that we reach exactly the resonance frequency of the cable," says Wolfgang Träger. "The cable can be loaded up to 30 times per second in this way." With each individual load cycle, the cable is stretched five millimetres, then it becomes ten millimetres shorter before it returns to its original position. Following the continuous oscillation test, the cable is loaded with an almost unimaginable force of 42 meganewtons to determine the load-bearing capacity of the test specimen - the equivalent of the weight of around 50 railway locomotives or almost a thousand elephants.

Millions of load cycles
It is hardly possible to set up such a powerful facility in an ordinary university laboratory in the middle of a built-up area, so a big hall in the Science Center of TU Wien was used. "During the experiments it is extremely loud in the hall, you feel the vibrations all over your body," says Wolfgang Träger. "But with our method, millions of loads can be applied virtually overnight to make reliable statements about the fatigue strength of the  strand cables ." This not only saves time, but also energy. The energy input can be reduced by a factor of 1000 compared to existing systems and, in addition, the test duration is reduced by a factor of 30 to 60.

There are currently no similar facilities anywhere else in the world. In future, TU Wien will offer a range of material tests in cooperation with TÜV Austria TVFA - such as the testing of tendons for wind turbines, segment segments for tunnel construction and supports for high-rise building construction. 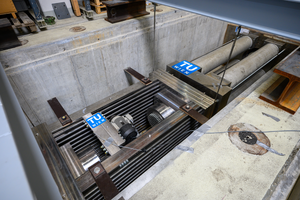 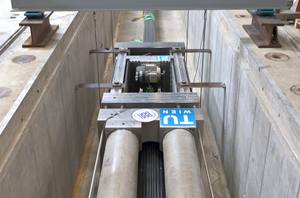