Safeguarding native tree diversity through improved conservation and restoration efforts is at a critical juncture in Southeast Asia as many tree species face threats from habitat loss, fire and climate change, among other human-caused threats. A new study used a spatially explicit framework to identify species-specific priority areas for conservation and restoration among rosewood species in the Greater Mekong Subregion, which includes Cambodia, China, Lao PDR, Myanmar, Thailand and Vietnam. The research focused on three highly valuable Asian Rosewood (Dalbergia spp.) species, Siamese rosewood, Burma blackwood, and Burmese rosewood. All were found to face significant risk to at least one of five threats across 75% of their native ranges: overexploitation, fire, overgrazing, habitat conversion, and climate change.
The continued decline in genetic diversity reduces the rosewoods’ ability to adapt and survive in a changing environment and narrows the window of opportunity to restore productive populations which are highly fragmented due to human activity. Illegal logging and deforestation, mainly for agricultural expansion, are major concerns. Calls for the protection of Southeast Asian rosewoods have mounted for more than 20 years. The trees are included in the International Union for the Conservation of Nature (IUCN)’s Red List of Threatened Species and the Convention on International Trade in Endangered Species of Wild Fauna and Flora (CITES) restricts international trade of the entire Dalbergia genus, which is prized for its hardwood.
The study, published in Biological Conservation in April, provided high-scale threat mapping for the rosewood species across different ecological regions. The work can help conservation planners prioritize efforts such as restoration, conservation both in forests and farmlands, and effectively measure the effectiveness of their efforts. The study can also act as a model for the conservation of other tree species in the region.

Rosewoods are the most lucrative form of illegal flora trade, exceeding ivory in terms of trade value, as per UN data. Increasing anthropogenic (human-caused) threats, including climate change, increase the species’ sensitivity also to other risks such as forest fires, which impact mature trees, their ability to reproduce and seedlings. Rosewoods in Asia are highly diverse within species as populations have adapted to the variety of environments where the species grow across the Greater Mekong. If left unprotected, their unique genetic diversity is vulnerable to extinction. For conservation planning to succeed, modeling species distributions and threats with spatial data and using ecoregions as a proxy for genetic variation are helpful tools as a stopgap measure in the absence of range-wide genetic data.

The researchers from the Alliance of Bioversity International and CIAT, a CGIAR research center, made use of a spatial framework to have an overview of the diversity of environments where species grow and assess gaps for conservation measures.
“Information on threatening processes and the relative vulnerability of areas and species to these processes is therefore crucial for effective conservation planning,” said Hannes Gaisberger, the study’s corresponding author and researcher at the Alliance.
“Spatial approaches serve as a complementary method to field studies by helping narrow down target areas for follow-up surveys and benefitting tropical regions where there is high species diversity and where conservation resources are limited,” said Riina Jalonen, a study co-author and Alliance researcher.

The authors produced recommendations to improve the conservation of the three rosewood species in the study, including in situ and ex situ conservation, and restoration to beef up current conservation measures of specific adaptive capacities within species. The study looked more closely at the vulnerability of the three species to key threats, species-specific and ecoregional conservation priorities, and opportunities for cooperation and synergies among countries for conservation efforts.
Jalonen emphasized that not all species’ populations are equal. They have unique adaptation capacities based on various environmental conditions, making genetic diversity key in ensuring survival under current and future conditions.

Action maps were produced by running recent datasets against each threat exposure estimate, except for climate change exposure which made use of climate projections for 2055. Maps generated illustrate where climate change allows for in situ conservation, restoration activities like active planning or assisted regeneration are viable, and where ex-situ activities are greatly needed.
Overall, all three studied species are at risk across the Greater Mekong, particularly with overexploitation, habitat conversion, and fire.

Taking the next step for conservation and restoration
Only a fraction of the rosewood population in Asia is found in protected areas; the rest of the population is dwindling in the studied ecoregions. Species in protected areas are also not guaranteed survival due to limited access and the rapid changes in the environment, needing urgent conservation actions.
Conservation and restoration activities require immediate action and the use of various resources.

Gaisberger underscores that spatial analysis helps target areas with high predicted potential for conservation and synergies among species and countries, saving both resources and time in the race against local extinction of Asian Rosewoods and other valuable tree species.
Chris Kettle, the Global Program Leader on Tree Biodiversity at the Alliance said that future work to stem from this is to engage local guardians of diversity. “One of the major areas to evolve from this is to support smallholder farmers to increase tree cover on their farms, to enhance biodiversity, increase carbon and advance nature-positive agriculture,” said Kettle, a study co-author. Producing seeds and seedlings of rosewoods is potentially an important source of additional income for farmers, as interest for planting the species grows rapidly and one kilogram of seed can cost up to US$250.
The Alliance is optimistic that through regional initiatives, it will be possible to mobilize cross-country collaborations in conserving and restoring highly valuable and threatened tree species.

Sean Mattson
The Alliance of Bioversity International and the International Center for Tropical Agriculture
s.mattson@cgiar.org
Cell: 311-784-7652 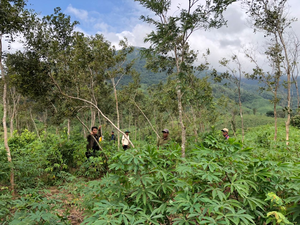