URBANA, Ill. — Engineering enzymes to perform reactions not found in nature can address longstanding challenges in the world of synthetic chemistry, such as upgrading plant-based oils into useful biochemicals.

A team of researchers has developed a simple yet powerful strategy for creating new enzymes with novel reactivity that can produce valuable chemical compounds, building on their previous work using light to repurpose naturally occurring enzymes.

The study, published in Nature Catalysis, was led by Xiaoqiang Huang, a former postdoctoral researcher in the University of Illinois Urbana-Champaign’s Department of Chemical and Biomolecular Engineering (ChBE) and the Center for Advanced Bioenergy and Bioproducts Innovation (CABBI), a U.S. Department of Energy-funded Bioenergy Research Center. Huang, currently an Assistant Professor at the Nanjing University in China, carried out this work in the laboratory of ChBE Professor Huimin Zhao, CABBI’s Conversion Theme Leader and an affiliate of the Carl R. Woese Institute for Genomic Biology (IGB).

In the study, visible light was used to excite an engineered ketoreductase enzyme, enabling a new-to-nature biocatalytic reaction known as an asymmetric radical conjugate addition, which is extremely difficult to achieve by chemical catalysis.

Catalysts are substances used to speed up chemical reactions. In living organisms, protein molecules called enzymes catalyze reactions in a process called biocatalysis. Scientists have begun using biocatalysis to synthesize valuable compounds, as its high selectivity allows them to deploy enzymes to act on specific substrates and create target products. Another advantage is that enzymatic reactions are highly sustainable. They are relatively inexpensive, consume low levels of energy, and do minimal damage to the environment — as opposed to chemical catalysts, which typically require organic solvents, heat, and high pressure to function.

Still, enzymes are complicated to work with. They are normally limited to catalyzing reactions found in nature, meaning scientists often struggle to track down the perfect biocatalyst to meet their needs. Zhao’s lab has focused on steering biocatalysis with visible light, a process known as “photobiocatalysis,” to produce new enzyme reactivity. In a previous study, Zhao and Huang developed a visible light-induced reaction using an enzyme named ene-reductase (ER) as a biocatalyst to produce high yields of valuable chiral carbonyl compounds, which have potential applications for production of high value chemicals.

The new study builds on that work, using photobiocatalysis on a different enzyme family — nicotamide-dependent ketoreductases produced by bacteria — and a different chemical mechanism to produce another type of chiral carbonyl compounds known as α-chiral esters. Through the illumination and evolution of ketoreductase, the team achieved an enantioselective biocatalytic Giese-type radical conjugate addition to transform fatty acids to α-chiral esters, Zhao said.

Enantioselectivity is the degree to which an enantiomer — one of a pair of molecules that are mirror images of each other — is preferentially produced in a chemical reaction. Chirality is a fundamental feature of organic compounds, which greatly influences the properties of molecules, and its implications are enormous in many areas, including biology, medicine, and material science. For example, the diverse stereochemistry of organic molecules (the spatial arrangement of atoms and its effect on chemical reactions) not only significantly enhances the richness of the biological world, but also plays a profound role in many biological activities such as molecular communication, he said.

The findings offer practical applications for CABBI’s work to develop biofuels and biochemicals from crops like miscanthus, sorghum, and energycane instead of petroleum. The new biocatalytic transformation could use the fatty acids that CABBI is generating from those plants as starting materials to synthesize value-added bioproducts — such as ingredients for soaps or skin-care products — in an environmentally friendly way.

“Although we did not target a specific product for further application, this work provides a practical new method that could be potentially applied to upgrading fatty acids,” Zhao said. “Enzymes are the workhorses for biological synthesis of fuels and chemicals from renewable biomass.

“One of the major scientific changes in CABBI’s Conversion research, or bioenergy research in general, is the lack of known enzymes with the desired activity and substrate specificity for the synthesis of target fuels and chemicals. Therefore, there is an urgent need to develop new strategies to discover or engineer enzymes with desired activity or reactivity.” 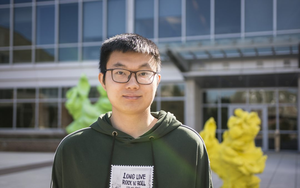