WASHINGTON (May 3, 2022) — There are approximately 750 species of salamander known to science, a third of which reside in North America. Now, a team of researchers led by R. Alexander Pyron, the Robert F. Griggs Associate Professor of Biology at the George Washington University, has discovered a new species of swamp-dwelling dusky salamander from the Gulf Coastal Plain of southeastern Mississippi and southwestern Alabama.

The discovery increases knowledge of the biodiversity in the southeastern United States Coastal Plain, a candidate region meeting the global criteria for a biodiversity hotspot. According to the researchers, the region has been studied intensively for hundreds of years, but nonetheless still contains abundant undescribed diversity.

“This discovery shows us how much more there is to learn even in our own backyards,” Pyron said. “The famed naturalist E.O. Wilson called this region ‘America’s Amazon,’ where ivory-billed woodpeckers and red wolves once lived. We are losing biodiversity at a dramatic rate, while still discovering how much was originally there. Salamanders are among the most imperiled animals globally, and we’ve yet to understand their true biodiversity.”

The researchers determined that the new species of salamander, known as Desmognathus pascagoula, is similar to another recently discovered species known as Desmognathus valentinei. However, certain morphological, genetic and geographic aspects of the new species differ. The researchers sequenced the genomes from D. valentinei and D. pascagoula specimens, revealing genetic variations in 881 different genes. They also compared the body structure of D. pascagoula with D. valentinei and Desmognathus conanti, another species that occurs in the area, using collections from the Smithsonian’s National Museum of Natural History. They found subtle but significant differences: D. pascagoula has a longer, more slender body and a narrower head and nostrils.

“Many of these dusky salamanders are cryptic, meaning they can’t easily be told apart with the naked eye, which is one reason they went undiscovered for so long,” Pyron said. “Only with genome sequencing can we see how different they really are. Then, precise measurements of preserved specimens reveal tiny differences in things like the width of the head, which are otherwise imperceptible.”

According to the researchers, additional work will be needed to provide insight both into the biology of D. pascagoula, as well as its former and current geographical extent. Pyron encourages other researchers in the field or citizen scientists searching for the species to focus on images of the lateral surfaces of the body and head, such that “portholes,” postocular stripes, and snouts are clearly visible. Future research may also reveal the presence of other undescribed species of Desmognathus in the Coastal Plain of the southeastern U.S.

The study, “A new, narrowly endemic species of swamp-dwelling dusky salamander (Plethodontidae: Desmognathus) from the Gulf Coastal Plain of Mississippi and Alabama” was published May 3, 2022, in the journal Zootaxa. The research team also included Kyle O’Connell of GW, Jennifer Lamb of St. Cloud State University, and David Beamer of Nash Community College.

A new, narrowly endemic species of swamp-dwelling dusky salamander (Plethodontidae: Desmognathus) from the Gulf Coastal Plain of Mississippi and Alabama 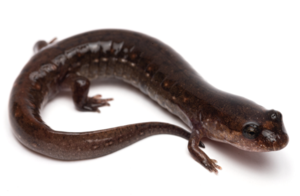 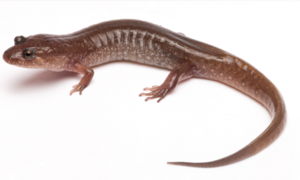 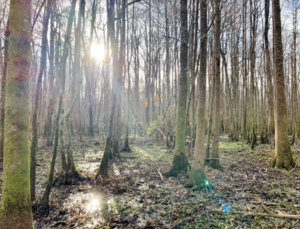