The remnants of a collapsed neutron star, called a pulsar, are magnetically charged and spinning anywhere from one rotation per second to hundreds of rotations per second. These celestial bodies, each 12 to 15 miles in diameter, generate light in the x-ray wavelength range. Researchers at The Grainger College of Engineering, University of Illinois Urbana-Champaign developed a new way spacecraft can use signals from multiple pulsars to navigate in deep space.

“We can use star trackers to determine the direction a spacecraft is pointing, but to learn the precise location of the spacecraft, we rely on radio signals sent between the spacecraft and the Earth, which can take a lot of time and requires use of oversubscribed infrastructure, like NASA’s Deep Space Network,” said Zach Putnam, professor in the Department of Aerospace Engineering at Illinois.

“Using x-ray navigation eliminates those two factors, but until now, required an initial position estimate of the spacecraft as a starting point. This research presents a system that finds candidates for possible spacecraft locations without prior information, so the spacecraft can navigate autonomously.”

“Also, our ground communication systems for deep space missions are overloaded right now,” he said. “This system would give spacecraft autonomy and reduce the dependency on the ground. X-ray pulsar navigation gets us around that and allows us to determine where we are, without calling.”

Putnam said because our atmosphere filters out all the x-rays, you have to be in space to observe them. The pulsars emit electromagnetic radiation that look like pulses because we measure the peak in the x-ray signals every time the pulsar spins around and points toward us—like the ray of light cast from the beacon on a lighthouse.

“Each pulsar has its own characteristic signal, like a fingerprint,” he said. “We have records of the x-rays over time from the 2,000 or so pulsars and how they’ve changed over time.”

Much like the Global Positioning System, location can be determined from intersection of three signals.

“The issue with pulsars is that they spin so fast that the signal repeats itself a lot,” he said. “By comparison, GPS repeats every two weeks. With pulsars, while there are an infinite number of possible spacecraft locations, we know how far apart these candidate locations are from each other.

“We are looking at determining spacecraft position within domains that have diameters on the order of multiple astronomical units, like the size of the orbit of Jupiter—something like a square with one billion miles on a side. The challenge we are trying to address is, how do we intelligently observe pulsars and fully determine all possible spacecraft locations in a domain without using an excessive amount of compute resources,” Putnam said.

The algorithm developed by graduate student Kevin Lohan combines observations from numerous pulsars to determine all the possible positions of the spacecraft. The algorithm processes all the candidate intersections in two dimensions or three dimensions.

“We used the algorithm to study which pulsars we should observe to reduce the number of candidate spacecraft locations within a given domain,” said Putnam. Results showed that observing sets of pulsars with longer periods and small angular separations could significantly reduce the number of candidate solutions within a given domain.

The research was funded in part by NASA. 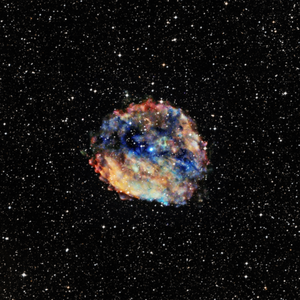