Fossils can tell scientists a lot about an animal such as their morphology, their environment, and where to place them in the tree of life. One thing though that’s very difficult to observe in the fossil record is an animal’s reproductive behavior. It takes a very uniquely preserved fossil to reveal the secrets behind reproductive strategies in some of the earliest complex animals.

In a new study in Geology PhD candidate Sarah R. Losso and Professor Javier Ortega-Hernández, both in the Department of Organismic and Evolutionary Biology at Harvard,  reveal the mating behavior of trilobites from the mid-Cambrian fossil, Olenoides serratus.

Trilobites are a group of 520-250 million years old arthropods likely near the branching point of two major groups of arthropods, the chelicerates (horseshoe crabs, spiders, and scorpions) and the mandibulates (centipedes, crabs, and insects). They dominate the Paleozoic Era fossil record, are found on every continent, and have over 20,000 described species. They are named for the three-lobed appearance of their durable exoskeleton enriched in calcite, which is easily preserved and has produced an excellent fossil record. Trilobite morphology has been extensively studied, but little is known about trilobite reproduction. Rare examples include those of unfertilized eggs that have been found underneath the head of a presumably female specimen, as well as clusters of fertilized eggs which were deposited in sediment during the Cambrian. Researcher have hypothesized that large clusters of trilobites fossilized together might represent mass molting and mating events similar to those observed in living marine species such as the Atlantic horseshoe crab Limulus polyphemus. Yet, the reproductive behavior of trilobites, including their mating and fertilization, remains practically unknown.

Losso, who is working on a comprehensive redescription of the morphology of Olenoides, studied and imaged every Olenoides serratus specimen available from the Royal Ontario Museum, the Geological Survey of Canada, and the Invertebrate Paleontology collections at the Smithsonian Institution. O. serratus is known from several sites in North America, but all specimens with preserved appendages were collected from the Burgess Shale in British Columbia, Canada. Unlike the exoskeleton, appendages (antennae, legs and gills) do not get preserved very frequently because they are not reinforced with calcite. The preservation of appendages requires unique conditions at the time of burial, which are present in the Burgess Shale and other rare sites with exceptional fossil preservation. While examining one well-preserved fossil from the Burgess Shale housed in the Royal Ontario Museum, Losso discovered peculiarly modified clasper-like legs in the mid-body similar to those found on adult male horseshoe crabs, suggesting a similar mating strategy.

Losso examined 65 specimens with preserved appendages known to date. Twenty-three specimens had legs preserved in the correct part of the body where the clasper-like appendages were found; however, with their intact exoskeleton claspers would not be visible even if present because of the reduced size. Four specimens provided a clear view of the tenth and eleventh appendage pairs, but only one specimen of O. serratus revealed that are modified into claspers. The  three other specimens with visible appendage pairs had a more conventional leg-like appearance.

Although the specimen of O. serratus with claspers is missing half its exoskeleton it worked in the researcher’s favor. “This specimen is truly unique in that it is well preserved enough to show the exceptional details of the limbs modified into claspers, but broken so we can actually see these reduced limbs that would otherwise be covered by the dorsal exoskeleton,” said Losso. “Ironically, if the specimen were better preserved with a complete dorsal exoskeleton we would not have as much information about its limbs as we do now.”

Losso made several measurements of the individual pieces of the reduced appendages and compared them to appendages in the body of the same specimen and to appendages known from different Olenoides in that same position. This demonstrated that the smaller appendages have a unique morphology only known from this specimen. Losso then examined specialized appendages in other living arthropods for comparison and to understand what the appendages could be used for.

There are thousands of species of trilobites that have a 200-million-year-old history. But without a close living relative it is difficult to know reproductive behavior. Horseshoe crabs, though not closely related to trilobites, are often used as modern analogs because they superficially look like trilobites making for a useful comparison. Horseshoe crabs, like Limulus, are marine arthropods known for mass spawning events off the coast of Delaware and Cape Cod. During these events, males use their claspers to grab onto the female so they are correctly positioned to fertilize eggs released by the female.

Claspers are special hook-like appendages often found in male arthropods. The male uses the claspers to hold onto the female during mating. Different groups have convergently evolved this appendage in different parts of the body depending on the exact mode of mating in that clade. Branchiopods and horseshoe crabs have both evolved claspers, but they function in different ways according to the female’s exoskeleton. For instance, branchiopods clasp on to the carapace, while Limulus clasps on to the spines. In O. serratus, the males claspers would line up with the spines on the female’s pygidium.

“We knew it could not be for mastication because the appendages are not near the head or mouth, they’re in the middle of the body,” Losso said. “This shows sexual dimorphism in trilobites, but in this case it is only expressed in the appendages. This tells us more about the reproduction in trilobites and how they would have mated, which previously has been hard to understand and has been very speculative based on modern analogies.”

“There are very few cases of fossils that have directly informed reproductive ecology and behavior, particularly in fossils this old. In this case, because there is a structure that is very specifically adapted for this function, it is possible to make this particular argument, and more particular of trilobites,” said Ortega-Hernández. “This really is the first time that it is possible to show these limbs so heavily modified for this function. And it provides strong evidence to suggest that a Limulus, or horseshoe crab-like behavior, already existed in the Cambrian completely by convergence. So, it really helps us to get a sense of how these animals were actually living millions of years ago.”

“Trilobites can help us understand the evolution of the most abundant and diverse group of animals and produce insights into the reproductive ecology of early animals,” said Losso. 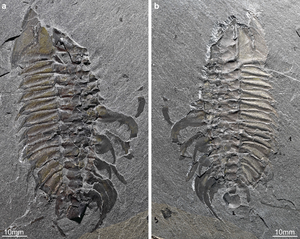