The Save Our Seas Foundation (SOSF) has joined the Shark Conservation Fund (SCF) as one of its members. Dr James Lea, the SOSF’s chief executive officer, has joined the advisory board and says of the partnership, ‘I am delighted that we are joining the Shark Conservation Fund. Combined with our own projects, it provides us with an even greater opportunity to make a real difference for sharks on a global scale.’ The aim of this collaboration is to maintain healthy oceans by preventing the extinction of shark species.

‘We are a funders’ collaborative and we provide grants for three priority shark conservation action areas: preventing extinctions; using CITES (the Convention on International Trade in Endangered Species of Wild Fauna and Flora) to drive better shark and ray management; and combating overfishing,’ explains Lee Crockett, the executive director of the SCF. A philanthropic collective that focuses on protecting the oceans by conserving sharks, the SCF was started by five founding partners: the Leonardo di Caprio Foundation, the Paul G. Allen Family Foundation, the Paul M. Angell Family Foundation, Oceans 5 and the Leona M. and Harry B. Helmsley Charitable Trust. ‘The argument that we are making is that sharks are particularly vulnerable to overexploitation as a result of their life histories,’ says Lee. In fact, a recent study has shown that more than a third of sharks are now considered at risk of extinction. ‘The vulnerability of sharks makes them an ideal focal point for biodiversity conservation. They are important to the functioning of ocean ecosystems and therefore we believe that if you focus on protecting sharks, you will conserve many other species and maintain healthy oceans,’ he continues.

The dire conservation status of sharks, an understanding of their ecological importance and the nature of the threats they face are the focus of the SCF’s investment strategy and align the SOSF to its mission. The SOSF will hopefully add its own scientific contribution to the multidisciplinary team that dispenses grants for shark conservation. ‘James is able to bring a scientific view to our decision-making, as well as the years of experience and networking in the conservation sector that comes with the SOSF being an established NGO,’ says Lee. It is unusual to see organisations collaborating to achieve a common goal, but the scale of the challenges to shark and ray survival– from illegal trade, overfishing, habitat destruction, pollution and climate change – requires cooperation and a multitude of skills across sectors to tackle the problem.

The oceans are the earth’s greatest climate regulator and act as a carbon sink, taking up the post-industrial emissions that have risen so alarmingly. Their healthy functioning is essential to how we face a future with climate change. However, they are losing biodiversity – the assortment of species that all play different roles in the oceans so that they can function as they do. We need to maintain biodiversity to ensure that ocean ecosystems are resilient to change if we are going to provide a buffer against the most serious effects of climate change.

Overexploitation, through overfishing and illegal trade, is the greatest threat to sharks. They are one of the most important marine animal groups that help contribute to functioning oceans, yet their populations are crashing. ‘Older than dinosaurs, sharks of some kind have been a constant in our oceans for millennia, yet in just a few decades we’ve cut their numbers by 70%,’ explains James. ‘As predators, sharks are integral to the stability of many marine ecosystems, and so helping these majestic fish to recover can in turn improve overall ocean health.’ Updated listings by the IUCN (International Union for the Conservation of Nature) on its Red List of Threatened Species show that of the 1,199 shark, ray and chimaera species assessed, 391 (32%) were listed as Critically Endangered, Endangered or Vulnerable to extinction.

For 2022 and the years ahead, the SCF will support the inclusion of shark and ray protection in the expansion of marine protected areas to meet the 30 by 30 goal, which aims to protect 30% of the earth’s land and waters by 2030. The SCF’s objective is to include spatial planning and to support partners’ protection of Important Shark and Ray Areas (ISRAs) in at least 100 marine protected areas established over the next 10 years. The SOSF and the SCF are proud sponsors of the ISRA process, which is spearheaded by the IUCN Shark Specialist Group. The SOSF Founder, His Excellency Abdulmohsen Abdulmalik Al-Sheikh, looks forward to what can be achieved for shark conservation. ‘Our shared vision of a sustainable future for sharks and rays and the synergies of our pooled expertise and resources make this the perfect partnership,’ he says. By combining skills and focusing on joint efforts, there is still a chance to turn the tide on one of the biggest species extinction crises of our time.

Funder
Save Our Seas Foundation 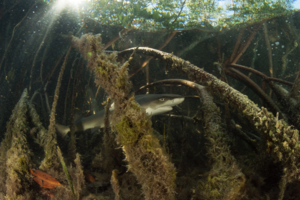 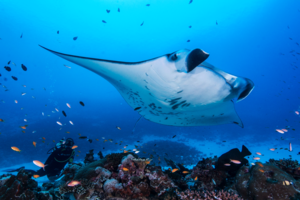